A BLUNDERING council official caused chaos after texting thousands of parents to tell them schools were closing.

The accidental message was sent to 16,000 parents in Falkirk Council area and caused widespread panic.

To make matters worse, the text was sent almost 40 minutes after the “closure time”, meaning worried parents wrongly believed their children were stranded at the school gates.

Anxious mums and dads desperately tried to arrange childcare or made plans to leave work early. 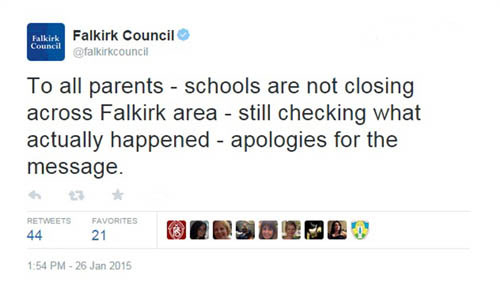 Worry was heaped on worry when at least one school wrongly told parents their system had been “hacked”.

Most schools use text messages to inform parents about matters such as truancy and emergency closures.

It is understood that a rookie member of staff at Falkirk Council was testing the system on Monday as part of a training exercise.

The message, sent at 12.38pm to eight high schools, 50 primaries and five additional support schools, stated: “The school will close today at 12pm.” 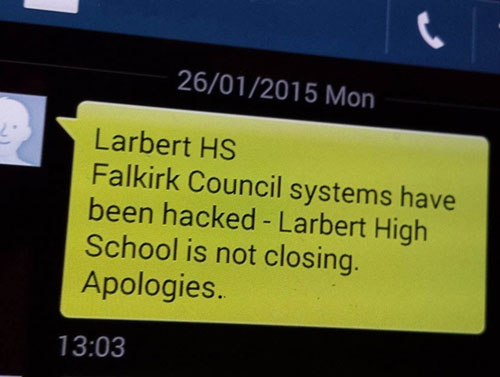 It was not until 1pm that the mistake was spotted and corrected by text.

A follow-up tweet confirmed: “To all parents – schools are not closing across Falkirk area – still checking what actually happened – apologies for the message.”

While St Mungo’s High School, texted: “Schools will not be closing today. Texts received stating school closing has not come from Falkirk council.”

One concerned mum said: “I kind of panicked to start with as it was completely out of the blue. I got a text shortly afterwards saying the school was not closing but it was really confusing.”

A grandparent explained: “My daughter is in Glasgow and she was really worried about getting back to Falkirk in time to pick her kids up so was trying to arrange for someone else to do it.”

The suggestion that the council had been hacked also caused worry. 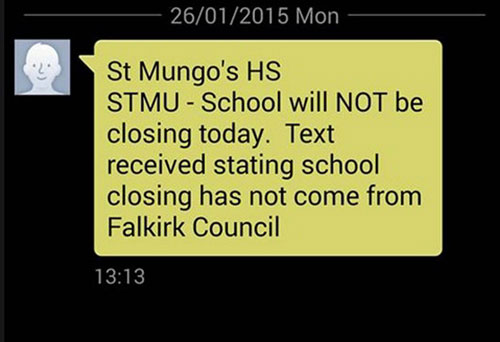 On social media, Anne Coney wrote: “ My question is how safe is our personal details if someone can hack into Falkirk council Education department how safe are we and our children.”

Carolyn Rawdling added: “Is this the council selling off our mobile numbers to make some extra cash? Expecting a load of PPI and solar panel calls any time now.”

“It was a new member of staff getting trained.”