A DEADLY mako shark could have inflicted the huge bite discovered on the fin of a Scottish killer whale, according to a marine expert.

A remarkable photo taken off the West Coast of Scotland has been release showing a large male killer whale with a chunk of his tail fluke missing.

After consultations with experts the Hebridean Whale and Dolphin Trust said the damage was “almost certainly the result of a shark attack”.

Now a Marine Biologist from the University of St Andrews has said while it is impossible to be certain it could have been a mako that took the bite.

Dr Yannis Papastamatiou said while it was extremely unlikely, an attack by a Great White could not be ruled out.

Mako sharks, which are known to attack humans, are a close relation to the great white and have been spotted in British waters. 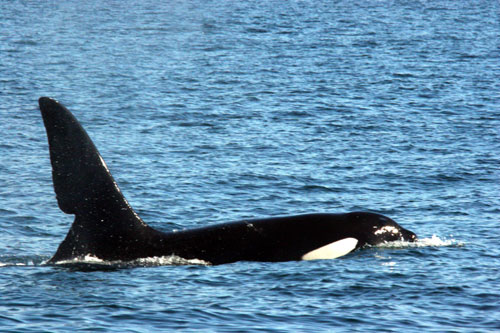 They can grow to up to four meters, are the world’s fastest shark, and are known to have attacked 42 people over 30 years.

The sharks attack by lunging from deep water and rip chunks of flesh from their target.

Dr Papastamatiou, a research fellow at the university’s Scottish Oceans Institute, said: “I can’t recall having seen evidence of a shark bite on a free swimming orca.”

After examining the image, he said it was “very surprising” for a shark to attack an orca that big.

Asked to comment on the most likely shark suspect, he replied: “Mako sharks, a close relation of the white shark, are in Scottish waters.”

Commenting on the possibility it was a great white that bit the killer whale he said: “It’s not impossible.

“There has never been a recognised record of a great white in British waters. That doesn’t mean they’re not there.

“It’s unlikely but not impossible.”

In December, a 10ft Mako was washed up on the Barmouth beach on the north coast of Wales.

Ali Hood, Director of Conservation for the Shark Trust, said: “Sharks generally avoid encounters with cetaceans and certainly a healthy mature Orca would not be the likely target prey for a shark.”