The former Dragons’ Den star revealed on Twitter he had taken a trip to the German supermarket for the first time and now plans to try out rival Aldi.

The 65-year-old wrote: “I went to Lidl today for first time. #justsaying”

And added: “What is difference between Lidl and Aldi? I might try Aldi tomorrow.” 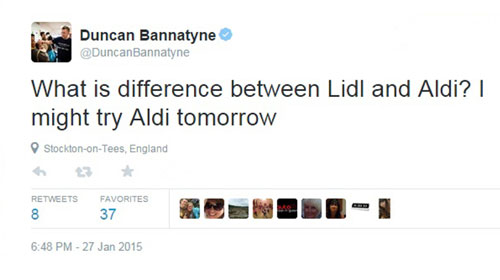 The surprise announcement sparked a stream of online money saving hints and tips for the savvy shopper.

Mary Culver replied: “Quite agree, all second to none, especially the bread and the veggies.”

While Scott Janaway added: “And pies. Don’t forget the pies.”

Bannatyne, who owns a health and fitness club empire, has previously spoken out about his divorce which he claimed had “crushed” him financially.

The Sunday Times Rich List showed his wealth fell from £430m to £85m in two years.

The entrepreneur from Dalmuir, Clydebank, West Dunbartonshire, started out his career with an ice cream van business and became a household name as a star of Dragons’ Den.