SCOTLAND’S biggest health board has asked Google to stop listing its complaints department as the main telephone number in search results.

Greater Glasgow and Clyde took the step after frustrated callers expecting to get the switchboard were directed to a complaints recorded message.

The health board has established that Google’s “web crawler” search software is turning up the complaints section number as the main result. Why it does this remains unclear. 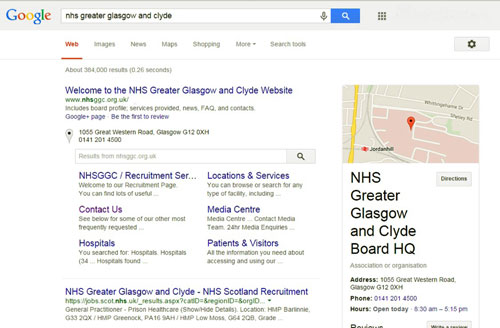 “So that we may direct your enquiry to the most appropriate part of the organisation, please listen carefully to the following six options before you make your choice.”

It ends: “For any other complaints enquiries, press 6.”

Greater Glasgow and Clyde is the largest health board in Scotland, serving 1.2m people and employing 38,000 staff.

A spokesman said: “Google automatically ‘crawls’ our website, as it does with all websites, and selects a number.

“We have no control over the number displayed, however our web team has contacted Google and requested ownership of the information so a more appropriate contact number is shown.

This will take a few weeks due to Google’s security procedures.”

He added: “The guys in the complaints team just kind of redirect the calls.”

Evidence suggests the complaints department is extremely busy doing its own job.

It was revealed earlier this month that the board is currently dealing with 516 legal claims, most of them relating to alleged negligence.

Earlier this month, the health board was slammed by the chief executive of the Patients Association after a heating system at the Southern General hospital in Glasgow broke down for almost a week.

Patients in Ward 3 were left shivering as temperatures plummeted and if they wanted to wash, staff had to boil a kettle for hot water.”