TWO SCOTS long-distance runners ran more than a marathon a day for nine days as they completed an epic run across one of the world’s oldest deserts.

Dr Andrew Murray, 34, and Donnie Campbell, 30, made the record breaking run of more than 313 miles (504km) across the Namib desert in Namibia which is home to the tallest sand dunes on the planet.

They undertook the challenge in a baking hot summer climate when temperatures exceed 35°c.

The two friends set off from Luderitz on 2 February and finished in Walvis Bay on Tuesday 10 February after running over 30 miles (50km) each day for nine days.

The email read: “Run Across the Namib desert- some parts have not even been explored properly, here are some photos, sore feet and adventure awaits”.

Scottish entrepreneur Bert Jukes of Lyprinol UK helped to fund the expedition and was of a team helping to support Andrew and Donnie. 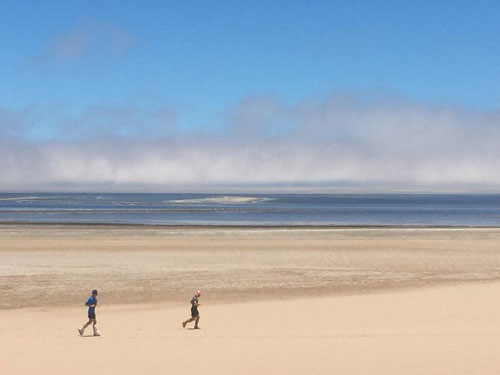 Speaking from Walvis Bay, Dr Murray, a GP from Aberdeen said: “The Namib desert is, hands down both the most spectacular and gruelling place I’ve run in.

“Every step through the sand was energy sapping, and my feet are destroyed with blisters. We were in hefty trouble even after 2 days, but our support team and the incredible views got us to the finish.

“There were times every day I felt like stopping, but taking on many 300 metre dunes, passing shipwrecks miles inland, and seeing the suprising plethora of wildlife were particular highlights.

“We don’t advise everyone to run through the Namib, but would like to promote the value of exercise. Even 30 minutes of walking 5 times a week helps you live on average 7 years longer.” 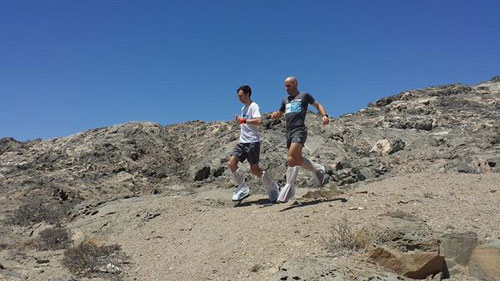 Donnie Campbell, a personal training who lives in Edinburgh, added: “Running 500 odd km though the Namib desert was extremely tough and we could not have done it without the expertise of our expedition leaders David Scott, Bert Jukes and the support and superb local knowledge from the team in Namibia.

“Their route selection was incredible considering no one has ever driven parts of the route never mind ran it, so this was a huge them effort to deliver Andrew and myself to Walvis Bay a bit battered, bruised and tired but still in one piece.

“We even ran through abandoned diamond mines, although my fiancee Rachael will be disappointed to learn I couldn’t find a big one ahead of our wedding next month!”

David Scott, from Glasgow, said: “Three months ago I challenged Donnie and Andrew to deliver a World first – to run from Luderitz to Walvis Bay across the mighty Namib Desert, supported by a joint Scottish, South African and Namibian safety team.

“As expedition organiser I was faced with huge logistical and safety concerns which we tackled as team and overcame to a successful and, more importantly safe conclusion.

“The physical demands we placed on the guys were immense and throughout the challenge we were never certain we would emerge successful.

“Apart from seeing the guys cross over the finish line my lasting memory will surely be having the privilege of tackling terrain through special concession areas which had never been driven or run over before.

“We are indebted to Bert Jukes and Lyprinol for believing in this expedition, and supporting it from the outset. I am also indebted to our excellent African partners Live the Journey

Andrew and Donnie are no strangers to racing in extreme conditions. Dr Murray ran 2668 miles (4295 km) from John O’groats to the Sahara Desert in 2012, and won races at the North Pole, Antarctica and Outer Mongolia.

Donnie Campbell, a former Royal Marine Commando made headlines in 2011 when he completed a 184 mile (296km)run from Glasgow to Skye without sleeping.