A TRAMPOLINE park which opened just three weeks ago has been hit by 102 injuries – including a man who broke his neck.

One of the victims was a two-year-old boy who broke his leg following an accident at the centre, which opened on January 23 this year. 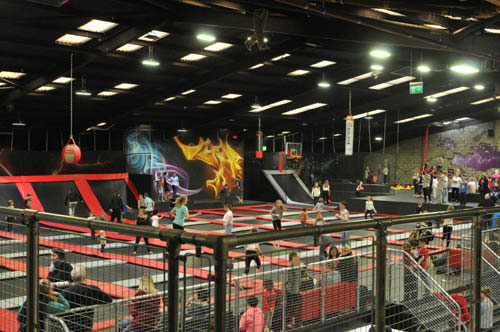 At least one customer is in discussions with a lawyer about possible legal action.

Midlothian Council has confirmed it is investigating the 10,000 sq ft facility in an industrial estate south of Edinburgh.

Ryze admits 102 accidents have been recorded but said its incident rate was just 0.39%, making it better than the industry norm and safer than other activities such as baseball and football. 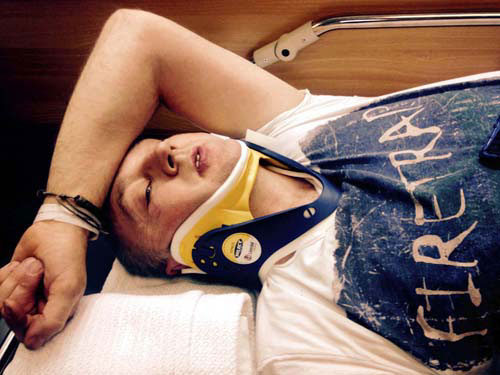 Customers over the age of seven pay £10 an hour to use the facility which boasts 60 connected trampolines, trampoline dodge ball, foam pits, bounce boards and basketball hoops.

Chris McKenna told of the sickening moment he heard his neck break after taking to one of the trampolines at Ryze.

He said: “I was going to do a sit down, spring up jump and got disorientated.

“I heard a crack as I ended up kneeling with my head down, as if I was praying. I could hear everything but couldn’t speak. My back, neck and head were in excruciating pain. I was even struggling to breathe.”

He added: “My aim isn’t to to shut them down – kids need somewhere to go. But they do need to improve their first aid. You should never move a person if there is a possibility of a neck injury.” 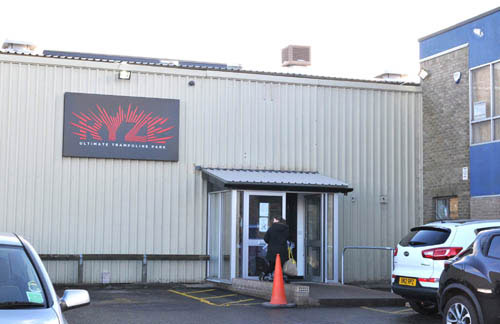 Claire added: “The first thing that happened when he hurt himself was for two of the staff members to come over and lift him up. They got him off the trampoline so that he wouldn’t be in the way of the other bouncers.

“Chris was white and at one point I saw him pass out. The organisation is abysmal.”

Mrs McKenna claims two members of staff lifted him and moved him off the trampoline, although the centre denies this happened.

She claimed: “Twenty minutes later I was still arguing with the boy to call an ambulance but he was just interested in filling in an accident form and kept saying for me to drive him to the hospital as the ambulance wouldn’t know where to come because it’s a new centre. 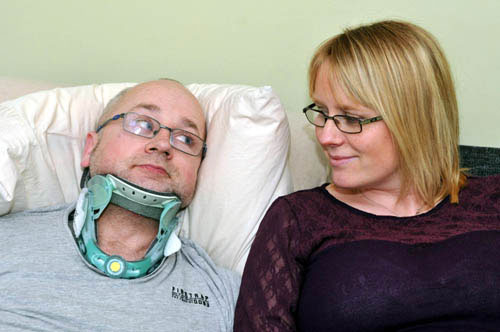 “He didn’t cordon off the area and was just asking people not to bounce near my husband. There was absolutely no control, it was absolutely crazy and I’ve never seen anything like it.

“The doctors at the hospital said he was lucky not to be paralysed as he should not have been moved.

“There were no first aiders there and the most damning thing was there was no control of the place.”

Mr McKenna is self-employed and now not earning money.

He will find out if he has to undergo an operation to have a metal plate inserted into his neck in two weeks’ time.

Marion Dickie, 35, from Edinburgh, said her two-year-old son Anderson sustained a bad break below the knee at the centre on Monday.
She said: “I would never go back to the centre, it was a complete disaster for us.

“The first aid and advice needs to be upped and all the boy was interested in was taking his name and date of birth for his accident report rather than dealing with his injury.

“They didn’t even have a proper ice pack and instead gave us a food bag full of sharp ice, it was ridiculous.”

She posted on their Facebook page review section: “I was bouncing on a trampoline when a basketball caught my left foot.
“I dislocated my knee and tore off a ligament. This area needs regulating.”

Another customer, Diana Rintoul, wrote on the centre’s Facebook page: “Absolutely disgusted with the way my son was treated after dislocating his shoulder on your premises due to the negligence of others.

“He was allowed to leave without receiving any medical attention other than a first aid person who insisted it wasn’t dislocated.”
Diana yesterday (fri) confirmed that she was in discussion with a lawyer about possibly suing the park.

Case Lawrence, Ryze chief executive, said: “This injury incident rate is right in line with what we see in the US and what we would expect here.

“It is actually better than the industry norms and we always see the incident rate decline after the first few months as the novelty wears off and people become more familiar with the rules and, frankly as our staff gain more experience and training.”

He added it was “very important” to put into context they had had 25,662 jumpers over the three week period and 102 injuries in that time was only a 0.39% incident rate.

A spokeswoman for Midlothian Council said: “Once we became aware that this business was operating, our inspections visited the premises on 6 February and gave advice on the company’s health and safety obligations.

“So far, we’ve received no reports of accidents at Ryze Ultimate Trampoline Park.
“However, having been made aware of a number of allegations of injuries, we have visited the premises and our inquiries are ongoing.”

The number of trampoline accidents have soared in the UK in recent years. A survey last year in Oxfordshire found they account for up to 50% per cent of A&E admissions for injuries in the home sustained by children under 14.