A FORMER police officer has won a victory over Facebook after the social media giant decided his gaelic name was “not real”.

Gavin McGowan was outraged when he failed to log in to his Facebook account using the same gaelic version of his name – Gabhan Mac A Ghobhainn – that has worked for four years.

To add insult to injury, Facebook threatened to close his account unless he used a “proper” name.

Mr McGowan, 53, from Glasgow, hit back by organising a petition which within days had attracted 2,000 signatures.

It is believed the use of capital letters and apostrophes in many gaelic names is falling foul of Facebook software designed to stop joke or bogus accounts being set up.

As a result, names including the gaelic version of Macleod – possibly the most common surname on Lewis – are not acceptable..

Facebook has now apologised and allowed Mr McGowan’s gaelic name to be used but Scottish gaelic remains unrecognised as a specific language option.

Campaigners say that is unfair when Irish Gaelic, “Pirate” and “Upside Down English” are catered for.

Mr McGowan, who worked for British Transport Police for 30 years, learned the new language from scratch about 10 years ago and has changed his driving licence and bank account to his gaelic name.

“It said “We don’t believe your name is your real name and unless you submit one that is acceptable to Facebook we will close your account.

“I felt anger. It was outrage – how dare they?” 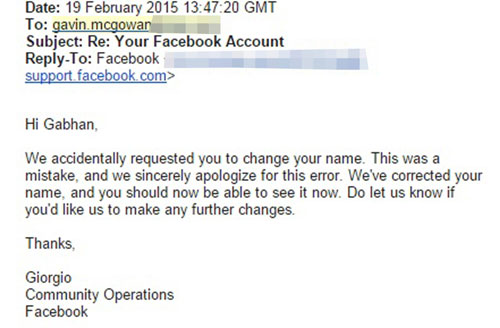 Facebook responded to the petition within a few days, telling him:“We accidentally requested you to change your name. This was a mistake, and we sincerely apologize for this error. We’ve corrected your name, and you should now be able to see it now.”

Mr McGowan said he was personally “delighted” but more needed to be done for Scotland’s 58,000 speakers of the language.

“What I want them to do now, is to allow the use of apostrophes in names,” he said. “The whole structure of Gaelic uses apostrophes.”

Mr McGowan and his wife Gail, 55, are both now fluent in the language, speaking it around the house.

He said: “I learned it out of sheer interest because it’s a stunningly beautiful language. There is an Irish Gaelic version on Facebook – there just isn’t a Scottish one. 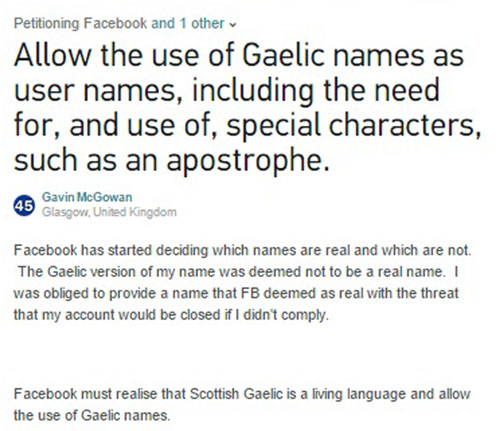 Common names which remain off limits include Macleod (MacGilleChaluim).

However Scots tennis star Andy Murray (Aindrea Moireach) would get the thumbs up.

Linguist Àdhamh Ó Broin, who worked as a consultant on the Outlander series said: “I’m very aware of the whole issue. I’ve got a few friends who were forced to change their name.

“Of course there should be a Gaelic option. There’s absolutely no reason why it can’t happen – given they are a multi-billon dollar corporation. We’re talking about a language that is one of the oldest in Europe. It’s outrageous.”

He added: “Considering you can have a pirate language option it’s actually ludicrous..”
Eilidh Scammell, project manager for Ainmean-Àite na h-Alba (Gaelic Place-Names of Scotland) which advises on Gaelic place-names for maps and signs, said: “I think Facebook should recognise Scottish Gaelic.
“There are 58,000 speakers here and another 10,000 or so abroad. It is a minority language, but not so much as others. I think it is just ignorance – they don’t realise.

“To people who are at the forefront of the revival, Facebook is very important – especially for learners.”