A MOUNTAIN rescue team has been banned from fundraising on a brand new £42m ferry because “passengers are sick of collection tins”.

The “baffling” decision has robbed the Hebrides Mountain Rescue Team of hundreds of pounds needed to provide lifesaving services in the Western Isles.

The team previously raised funds from collection tins on the Stornoway/Ullapool ferry – the main link between the Western Isles and the mainland.

But now state-run CalMac have introduced a new £42m vessel on the route they have banned the team from fundraising onboard.

At the start of the year CalMac shocked islanders when it announced there would be no bar on the new “superferry”.

This latest decision is said to have “taken aback” the island community known for its generosity.

The Hebrides Mountain rescue team cover the Western Isles – a chain of island with more than 1,000 square miles of land and 27,000 people.

As well as mountain rescue the team help the island community in times of need, recently taking a pregnant woman to hospital during the New Year storms that it the UK.

The 30 volunteers receive just £8,000 a year to buy equipment, fuel and to attend training. They have to raise about the same through fundraising events and collection tins.

The 45-year-old volunteer explained: “I’d just been away to pick up a new vehicle for the team and was speaking to the captain and the onboard service manager.

“I was chatting to them and mentioned the collection tins and they were positive about it.

“They passed it up to head office in Greenock. It went up to the head office and the following day the onboard service manager called up. 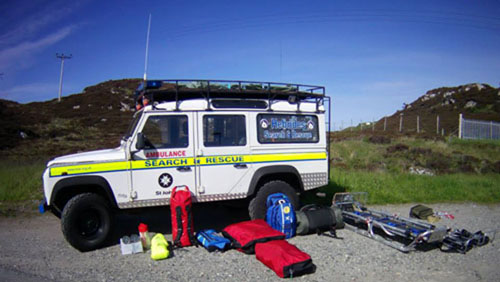 “There was surprise in his voice. They had just said, ‘No. The only tins we’re having now are RNLI ones’.”

Mr Norfolk said he called the head office to ask why they had taken the decision to ban the collections tins.

He said: “She just said people are sick and fed up with collection tins everywhere and people walking around rattling tins.

“But it was just one or two tins round the till we wanted.

“The team where a bit offended and in disbelief. The rest of the community have been taken aback by it.”

Asked if he had ever heard anyone complain about the tins he said: “Never in my life. No. It’s a bizarre comment.”

He added: “I run the cafe in the ferry terminal. I also have tins for other good causes.

“CalMac is effectively part of the government and not supporting a local charity doing their work.

“Companies do take on their own charities – maybe CalMac have chosen the RNLI is the one they are going to support?”

Asked if islanders are fed up with collection tins on the ferries he said: “I’ve never heard of any complaints in regards to that. It’s news to me.

A spokesman for CalMac said: “It is our policy not to allow volunteers to collect with cans or buckets on any of our vessels it is unfair on our regular passenger who may feel pressured into giving.”