A HIGH SCHOOL biology teacher has been struck off after he used Tipp-Ex to recycle year-old coursework.

David McCallum, who taught at Douglas Ewart High School in Newton Stewart, Dumfries and Galloway, took the work from another teacher’s class and inserted the names of new students.

A hearing of the General Teaching Council for Scotland (GTCS) heard that in March 2013 he took Higher coursework from the previous year and used Tipp-Ex to blot out the names. 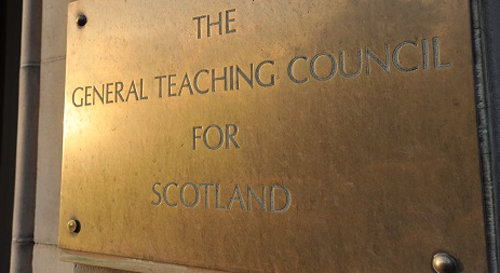 The teacher admitted presenting work undertaken by a Higher biology class of 2011/2012 as the work of the 2012/2013 class by changing the names of the pupils on the documentation.

He also admitted persuading pupils from the 2012/13 class to sign off the work of the class of 2011/2012 which he had changed to indicate that it was their work.

He did this without their knowledge or any explanation about the nature and extent of the documentation which they were signing.

The discrepancy was uncovered after worried students told another teacher that they still had work to complete in order to be able to sit their exam.

Carolyn Nimmo Scott, a biology teacher at the school, said: “At that meeting the work was laid out on the desk. A diagram caught my eye -it looked familiar.

“I returned to my class and went to the centre store where the evidence folders were kept for pupils from previous years.

“It was clear to me that someone had interfered with them and removed the write ups.

“I had one pupil who was very particular about his work. The diagram that Mr Mccallum had presented was identical to the one by that pupil.

“It was clear to me that Mr McCallum had accessed the evidence folders from my earlier class and had removed the documentation.

“He had had thereafter applied Tipp-Ex to the relevant parts, including my ticks reflecting the fact that I had marked them off, but had not altered the content.”

Kirsty Armstrong, another biology teacher at the school, said: “Mr McCallum had been absent for a couple of weeks. A student approached me and said she had a couple of [assessments] outstanding.

“I went into his room. looked into this particular pupil’s folder and found that there were none in this folder.

“I saw none of the learning outcomes in any of the pupil’s folders. The pupils stated they hadn’t completed them. They stated that Mr McCallum had told them he would complete this for them and it was a waste of time.”

She added: “It was a bad state of affairs. There was only a couple of weeks before the students went off on study leave. They were cramming. ”

A third charge, that during a disciplinary investigation Mr McCallum had made a false statement that the higher biology class had completed the learning outcome, was denied by the teacher but found proved by the panel.

Two other charges, of telling pupils that he would complete the write ups required as they were “a waste of time” and that he recorded pass parks for exams that had either not been marked or properly constituted a fail mark, were found not proved.

Mr McCallum was not present but in a statement from his lawyer he insisted he did not make false statements.

It emerged during the hearing that at a school disciplinary hearing the teacher claimed he had lost the coursework and did not want his students to lose out.