SALAD is on the menu if the latest bid to improve the Scottish diet is approved by the government.

Ministers are being urged to beef up the number of greens by introducing mandatory salad bars in restaurants.

NHS consultants believe that forcing vegetables to be served in the nation where 43% of the population is expected to be obese within 15 years could force Scots to eat more vegetables.

The SNP government has also announced that it wants adverts for junk food and alcohol to be banned in Scotland before the 9pm watershed. 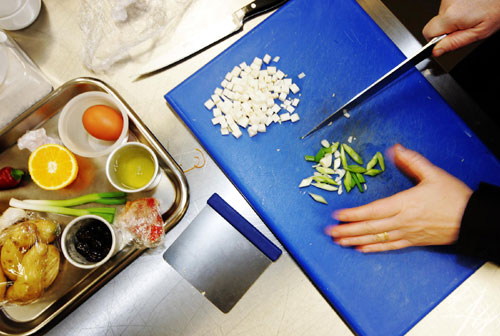 In a report to government ministers, the NHS consultants in dental public health, and the chief administrative dental officers group say: “If, as part of a meal, a restaurant is obliged to sell customers a salad every time they dine out, even in Scotland customers will probably eat it!”

Recent research by the Food Standards Agency (FSA) found that Scots are thirty years away from reaching the World Health Organisation (WHO) target of five portions of fruit and vegetables a day.

On average Scots eat 3.5 portions a day – despite advice that fewer than five portions increases the risk of health problems such as heart disease, stroke, diabetes and obesity and FSA research last year indicated the problem was worse.

Dr Colwyn Jones – spokesman from the consultants – said: “The idea is that all restaurants would have a salad bar and customers would have to buy a salad for £1 or £2 as part of a meal and they’d be more likely to eat it if they’ve paid for it.

“It’s a way of forcing people to eat salad. It wouldn’t be served to them – they’d have to walk up and choose what salad to eat but that might give them a bit of exercise too.

“There are Scandinavian countries already doing that and it could be good for the economy as well as health, giving more money to restaurants and also to farmers to grow crops.”

Carina Norris, a registered nutritionist and author of the You Are What You Eat books said she wasn’t convinced the idea would work.

She said: “People like me would certainly take advantage of it, but the trouble is that you could simply end up with a lot of food waste.

She does support another call from consultants and the British Dental Association for a sugar tax to be imposed on sugary foods and drink to reduce the incidence of obesity and tooth decay.

The Scottish Government’s main priority currently is to urge UK ministers to ban television adverts for unhealthy food and alcohol before 9pm to protect children. Currently such adverts are not allowed to be shown during children’s programs but they are allowed in the early evening.

“We need to make it easier for people to make healthier food choices which is why we are spending more than £7.5m between 2012 and 2015 on projects to encourage healthy eating.”