REMARKABLE pictures show how golden eagles were helped to survive the Scottish winter by feeding them deer carcasses.

Remote camera footage shows the fearsome hunters tearing into 300lb of meat from the dead hinds and reducing them to bones and hide within a few weeks.

The feeding programme took place on North Harris in the Western Isles, which has one of the highest concentrations of gold eagles in Europe. 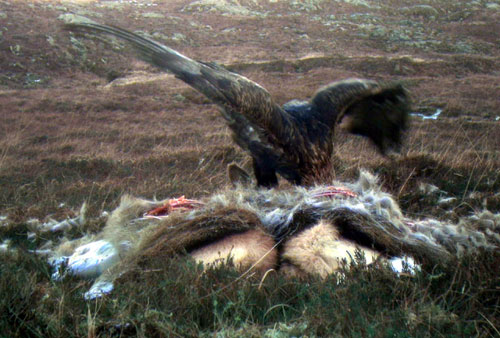 The 13 breeding pairs are struggling to find prey by the end of the winter but need to get into peak shape for the breeding season.

Rangers in the remote area laid out the carcasses of two culled red deer hinds and then set up a camera, taking a picture every few seconds, to record what happened.

The pictures – taken on February 14 – show a St Valentine’s Day massacre after the ravenous raptors, which have a two-metre wingspan, discovered the bodies within a few hours. 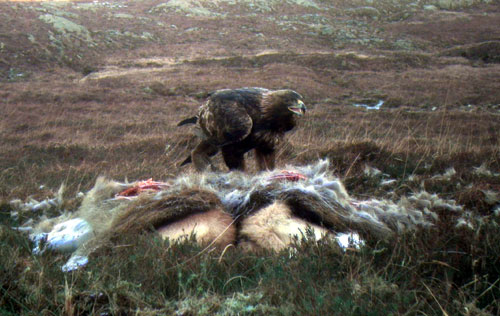 And within a month, aided by hooded crows, ravens and rats, all that remained was a picked-clean pile of skin and bones.

The camera, which even captured an eagle “selfie”, was left on the moor for a month by North Harris Trust ranger Matt Watts.

Matt said: “It was an infrared, motion sensor camera trap. 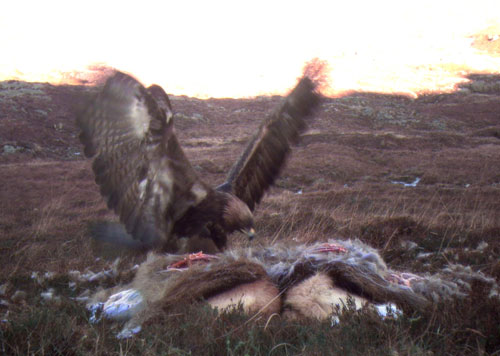 “We’d left two hind carcasses – elderly hinds. It was part of the supplementary feeding of the golden eagles at the end of the winter.

“At the end of the winter the eagles will be starting to struggle a little bit for food. This is giving them an extra boost before the breeding season.

“We’ve got stalking on the estate so the deer numbers are managed so there are less winter deaths of the deer and less available for the eagles. 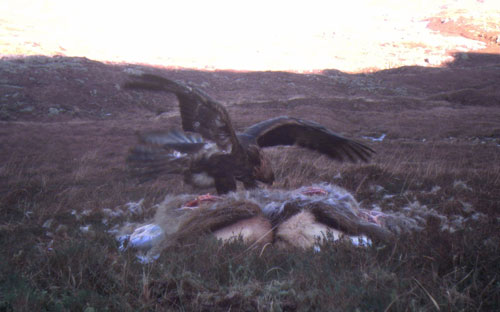 “Golden eagles here eat red grouse and mountain hares. They prefer live pray. But this is the toughest time of the year for everything in the wild.”

Matt, who borrowed the camera from the John Muir Trust, added: “I was really chuffed to get the it. I’ve never tried anything like that before.

“I’d tried not to get my hopes up too much – it was left out for four weeks.

“The first eagle came down just a few hours after it was set up.

“As well as golden eagles there were hooded crows and ravens and rats as well.

“I was very surprised that there weren’t any crows or ravens for a couple of weeks. There was a pecking order.”

The supplementary feeding programme is funded by the Scottish Government.

“Only in Harris!” Hilarious moment wedding party musicians arrive – on top of a moving van