Author JK Rowling has opened up to fans about being rejected by publishers and claimed one doesn’t even want her “in a beard”.

On Twitter she revealed one publisher who turned down Harry Potter also send “the rudest rejection” of her book written under the pseudonym Robert Galbraith.

The Scot who lives in Edinburgh was speaking to her massive online following on Monday.

She also joked she now has “over a million folders” all made of “costly silks” after a publisher kept the one she sent a manuscript in – much to her disappointment at the time.

In 1996 the first Harry Potter book was turned down by 12 publishers before being picked up by Bloomsbury. The series went on to sell more than 450 million copies.

The Cuckoo’s Calling, which Rowling published under the name Robert Galbraith, sold less than 500 copies before she was unmasked as its author.

In reply to fan Megan who asked: “How many no’s did you get before you finally got published?” 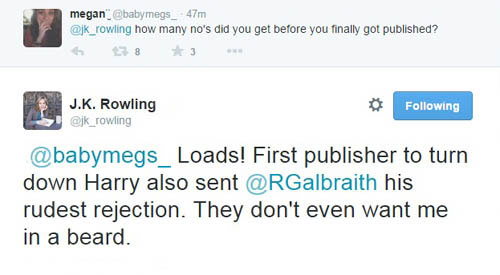 JK Rowling said: “Loads! First publisher to turn down Harry also sent Robert Galbraith his rudest rejection. They don’t even want me in a beard.”

Another aspiring writer called Kara asked: “Did you ever get nervous emailing agents when you first started out? I always feel nervous.Waiting for a reply is the hard part.”

To which Rowling replied: “The first agent I ever queried sent back a slip saying ‘My list is full. The folder you sent wouldn’t fit in the envelope.’

“I really minded about the folder, because I had almost no money and had to buy another one.”

Fan Jeassamine then questioned: “So how many folders do you have now JK?”

“I now have over a million folders,” Tweeted Rowling. “All made of costly silks, each one hand-gilded by artisans in Paris.”

The 49-year-old writer, who has become well known for her interactions with fans on social media, also revealed she undertook a personality test while working as a temp.

She said she came out as the INFJ personality type – a very rare one making up less than one percent of the population.

People with who fall into that type are said to have: “An inborn sense of idealism and morality, but what sets them apart is the accompanying Judging trait.”

According to the 16 Personalities website: “INFJs are not idle dreamers, but people capable of taking concrete steps to realize their goals and make a lasting positive impact.”