BIKERS dressed as Easter chicks and bunnies have taken to streets of Glasgow for their 36th Annual Easter Egg Run.

More than 1,100 riders took part in the parade organised by Yorkhill Children’s Charity, with many donning fancy dress.

They roared off from the SECC on an eight-mile tour of Glasgow’s city centre and west end.

They finished  at Yorkhill Hospital, where patients got the chance to leave the wards and sit on some of the bikes. 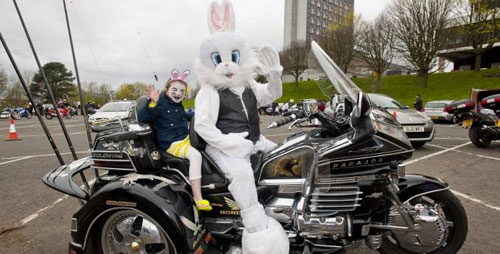 Kirsten Sinclair, Director of Fundraising at Yorkhill Children’s Charity, said: “This was the last Easter Egg Run before the big move to the new children’s hospital and it was a fitting send-off.

“Thank you to everyone who took part and for your kind donations which will go a long way to helping Scotland’s sick children and their families.”

The charity has raised more than £21m since 2001 and has already funded more than £5m in enhanced equipment and programme delivery at the new Royal Hospital for Sick Children.