UFOs have been spotted – floating above the west coast of Scotland.

Neil Borthwick took these remarkable pictures of flying saucer-shaped clouds from his home in Ullapool. 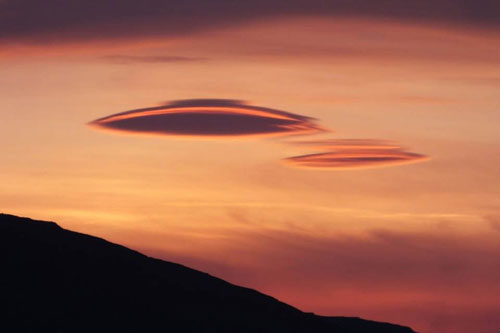 The 54-year-old snapped the clouds above Loch Broom on Thursday night and posted them online.

The rare lenticular clouds – created in certain conditions when air is pushed upwards by a mountain – are one of the most common causes of UFO reports.

But they are rare in the UK. 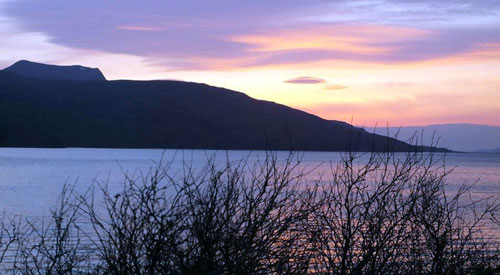 Mr Borthwick, an administrator, said: “It was shortly after 8pm, I just happened to glance at the window and I thought, that’s interesting.

“I went out onto the street beyond mine to get a photo. I’d reckon the clouds were in view for up to half an hour.

“There were other people taking photos of the sky – the sunset was spectacular apart from the fact the clouds were there.

He added: “I’m not suggesting for one minute we are being invaded by aliens. If they ever did come I’m not sure they would land in Ullapool anyway.” 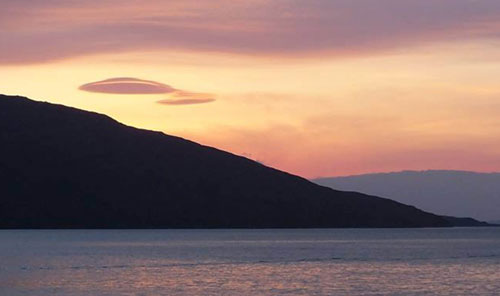 Despite his down-to-earth approach, it did not take long for the conspiracy theories to start.

William Topping, from South Shields, wrote on Facebook: “You might be laughing but these exact same cloud formations turned up on several different sites today and were witnessed at over 20 locations in the northern hemisphere, all within 60 minutes of each other.

“And as stated, absolutely identical, carbon copies. Now that is spooky…

“So much so, NASA took a whole load of them down within minutes of publishing.”