A SCOTTISH postie has become a local hero – after challenging Hollywood hardman Vinnie Jones to a fight.

Andy Simpson, 35, is being stopped in the streets of Pitlochry after he uploaded two videos in which he urged Jones to meet him in the boxing ring. 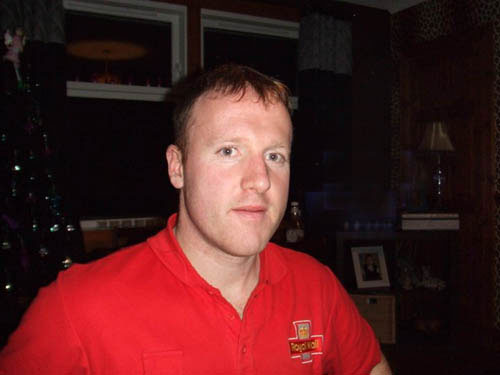 Andy, who has no boxing experience and calls himself a “midget”, taunted Jones: “I’m not just going to disappear like your acting career, laddie.”

Stripped to the waist in his kitchen, Andy added: “I challenge you to a match, I want a response. You V me – a celebrity box.”

But the 5ft 7in postie  is likely to regret his video, made after a drinking session in the town, if 6ft 4in Vinnie rises to the challenge.

The former footballer’s “robust” tackles on the pitch helped earn him roles in gangster movies such as Lock, Stock and Two Smoking Barrels, which shot him to fame  in 1998.

Now stone-cold sober, Andy has vowed to honour his challenge and to donate proceeds to motor neurone disease charities if Jones agrees to take him on.

A local gym has even offered to give him boxing lessons.

Andy admitted: “I’ve not had a fight for about 15 years, since I was in high school.

“I’ve had a few scuffles in the pub before but that was about it.”

He explained: “I’d come back from McKay’s hotel in Pitlochry. I’d had a couple of beers so I was feeling brave.

“I put on the telly and Vinnie Jones was doing a PR stunt carrying this guy’s belt to the boxing ring. I thought – why does nobody ever challenge Vinnie Jones?”

He added: “Everybody here knows me. It’s like – Simmy the postman is challenging Vinnie Jones.

“People have been pulling up in their cars to have a word. People are coming up in the supermarket and patting me on the back saying “Let’s get this Vinnie Jones”.

“I’m a midget compared to him but I’d quite happily get beaten around the ring for three rounds if it made money for charity.

Mr Jones’ agent did not respond to calls for comment yesterday.