THE periscope from a Cold War era British submarine has been reinstalled at a cost of £100,000 – at a golf course.

The 30ft-high periscope from HMS Excalibur is used to keep players safe at the links course in Elie, Fife.

The military-grade optics allow club officials to make sure players can tee off at the first hole without hitting golfers ahead of them.

It was housed in an old hut for decades but the club recently decided to spend a small fortune on a tailor-made, brand new building for the remarkable relic.

“It’s a unique part of the club,” explained secretary Gordon Fleming. “I’ve never heard of another.”

He said: “The hut was an old guard hut. It was literally just an old hut.

“It needed re-fitted and we decided this was better for members and visitors.”

It took six month to built the new structure which incorporates the periscope – still exactly the same as when it was part of HMS Excalibur.

“We had to get a special crane to lift it,” said Mr Fleming.

“We had a bell when the periscope was down but with the wind here you couldn’t hear it.”

“We use it for every player that plays. There are about 20,000 rounds played a year.”

Players at the first hole have to tee off over a small hill and – without the periscope – cannot see if anyone is on the other side.

Neil Simpson, a partner at Wellwood Leslie Architects who designed the new building, said: “It was very unusual. Unique you might say. 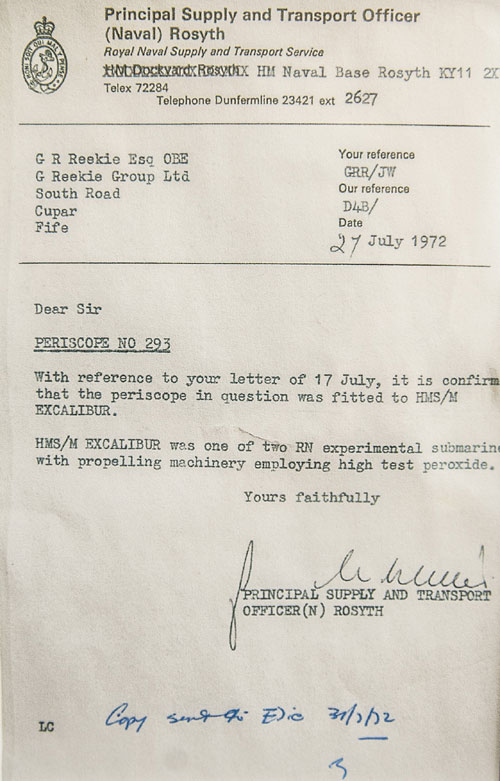 “It was a bit of a surprise when you went went down and saw it.

“It was a metal frame and a wooden shed underneath.”

Describing the old hut he said: “It was a garden shed held together with string.”

Mr Simpson continued: “The awkward thing was getting the crane into the site to take the periscope down and put it back. 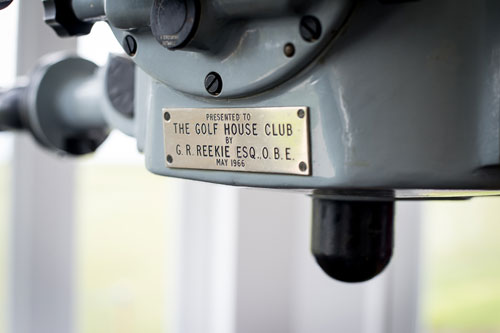 “We’re delighted we were able to keep the periscope – it was great to keep that bit of heritage.”

HMS Excalibur was one of two experimental weapons known as the ‘blonde’ subs because of their hydrogen peroxide fuel.

The bridge between diesel and nuclear submarines the volatile fuel was stored in the inner pressure hull and was prone to exploding.

Flames would often be seen in the engine room appearing on the top of the combustion chamber.

Lucky HMS Excalibur was fitted with the latest underwater escape technology of the time, including a one-man escape chamber with escape breathing apparatus.