SCOTS actor Billy Boyd was reunited with some of the Lord of the Ring cast in a mini-reunion.

It has been 14 years since the first Peter Jackson film of the Tolkien trilogy hit cinemas. 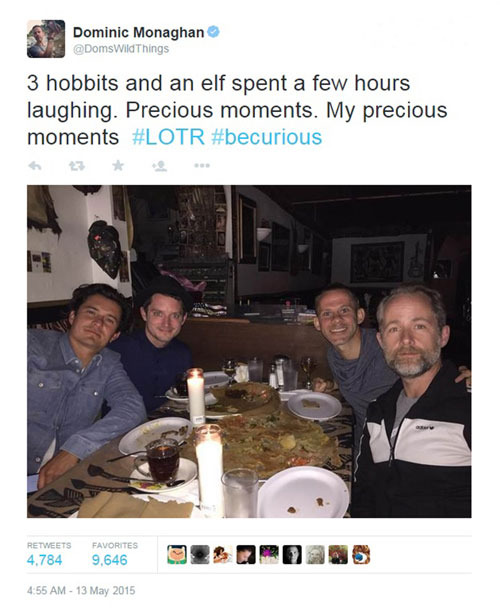 Boyd was shot to international stardom overnight after being cast as hobbit Pippin Took.

It was also the launch pad of the careers of Orlando Bloom, who played the long haired elf Legolas, and Elijah Wood in the lead role of Frodo Baggins

A picture of the four actors was posted on Twitter on Wednesday by Dominic Monaghan who played hobbit Meriadoc Brandybuck.

The photo shows the actors looking significantly different than when they first met, with Boyd even sporting a white beard.

It took eight years and a budget of almost £200m to film the Lord of the Rings trilogy.

The actors all have matching tattoos of the word ‘nine’ in the Elvish script created by Tolkien to represent the Fellowship of the Ring.