A TAXPAYER-funded drugs information charity has shut part of its website – after it was flooded with ads for illegal drugs.

Adverts for potentially dangerous prescription drugs such as Tramadol were on Crew 2000’s online forum for as long as four months.

The charity, also known  as Crew, got £50,000 from the Scottish Government to help set up the forum.

But staff only deleted the adverts after journalists started making enquiries last week.

The Edinburgh-based service, which says it “neither condemns nor condones drug use”, has received a total of £500,000 from the Scottish Government over the last five years.

The discussion forum was set up to let drug users get tips and advice from other users, as well as Crew 2000 staff and volunteers. It was part of a bigger project that included a drug information website and mobile app. 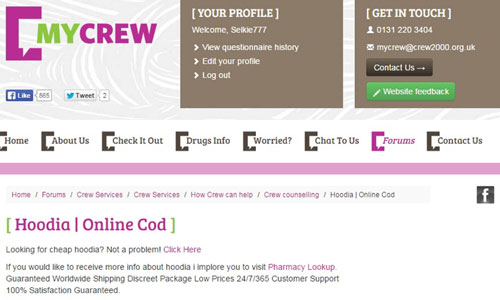 But it was hijacked near the beginning of January by dubious overseas companies selling a wide range of substances usually only available on prescription.

On 5th January this year, the first adverts appeared for counterfeit versions of anti-cancer drugs Femara and Anastrozole, which sell online for as little as £1.67 per 2.5mg  pill.

They were swiftly followed by adverts for other bogus medicines. These included a fake form of women’s fertility drug Clomid on 5th February. Thirty of the 100mg pills can be bought for £25.03 or 83 pence each.

Bromazepam – from the same “family” of drugs as diazepam –  also appeared on 23rd April. It is sold as little as 76 pence per pill. 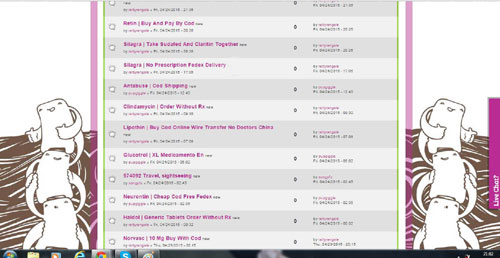 Bromazepam – from the same “family” of drugs as diazepam –  also appeared on 23rd April.

Last night, a spokesman for Taxpayers Scotland said: “Drug education and treatment is of course worthwhile, but a taxpayer-funded marketplace for illicit drugs is clearly beyond the pale.

“If Crew2000 are to receive so much taxpayers’ money, it needs to deliver on the promises they have made.

“Giving out grants does not mean devolving responsibility, though, so the Authorities need to step in if taxpayers’ money isn’t being used as well as it should be by organisations like this.” 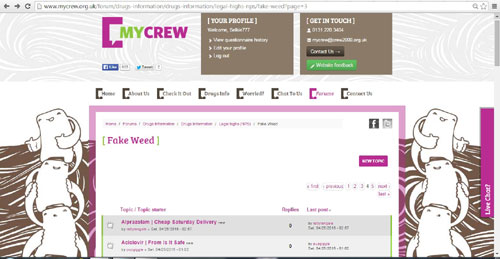 Professor Neil McKeganey, director for the Centre of Drug Misuse and Research in Glasgow, said; “Any organisation needs to be aware that their site could be taken over by companies using it to market or sell drugs.

“One would have hoped that the person monitoring the site would have noticed a lot sooner.  None of these drugs should be consumed except under medical supervision. 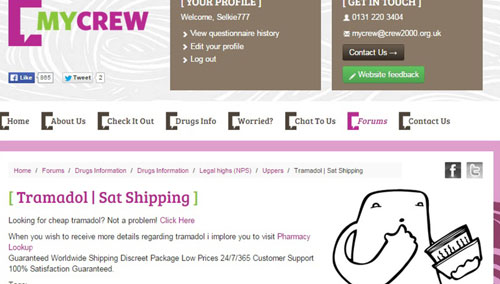 “Obviously we’ve been spammed. Our responsibility is to monitor that spam – unfortunately there that there was a problem and we weren’t able to monitor it fully enough.

“We are a very small voluntary organisation with limited resources and acute presentations.”

The spokesman added: “Website administration is a matter for individual organisations.”

21-year old Eloise Aimee Parry, from Shrewsbury in Shropshire died suddenly after taking “diet pills” she had bought online.  They turned out to contain pesticide.