Scotland’s only deathbed choir is struggling for an audience

SCOTLAND’S only “deathbed choir” has revealed it is struggling to find an audience.

The Moray Threshold Singers meet for 90 minutes every week to practice singing “a capella” harmonies to people as they slip away.

But the group is organising an open day in Glasgow this summer after performing just two “concerts” since it formed 18 months ago.

Threshold choirs are very popular in the US and Canada, where there are more than 100. But there are currently only two in Europe – in Moray and London.

And it seems Scots are proving resistant to the idea of musical accompaniment as they breathe their last.

The 15-strong Moray Threshold Singers, based in Forres, provide their service for free.

Their self-written compositions include lyrics such as “rest easy let every trouble slip away”, “you are not alone, I am here beside you” and “peace be with you”.

During rehearsals, each singer take their turn to lie on a reclining chair, so they can also feel what it is like to be sung to on their deathbed.

The all-female group, with ages ranging from 35 to 65, is part of a worldwide network of over 100 “Threshold choirs”.

Supporters say the voices create an atmosphere of peace and help patients come to terms with death.

Chloe Greenwood, from Kinloss, Morayshire, is the choir’s leader.

The 52-year old, who makes her living conducting civil marriage and funeral ceremonies, said: “I set up the group in November 2013. I just advertised it locally and 18 women turned up. I thought it sounded like a very caring, kind thing to do.

“The songs that we sing are are written by the choir. We don’t sing songs that may be known to people already.

“It’s not like something being done to them. If at the end of the song they smile we can ask if they want another one and then continue.

“The songs are very simple, very short with three-part harmonies and usually only three or four people go to a bedside, to make it as gentle and quiet as possible.”

She added: “In our practices, we have a reclining garden chair and we take it in turns to lie in the chair and be sung to.

“It helps us to be more attuned to what it feels like. But also we can give each other good feedback on things like volume, is it blending, are some of the voices too loud or whatever.” 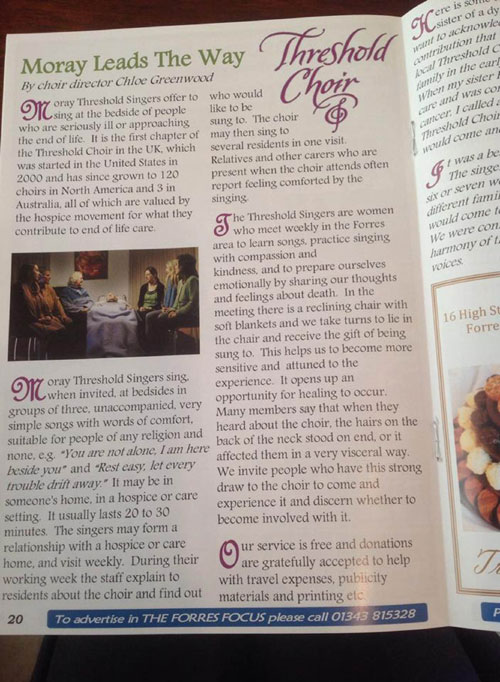 But they have not had many calls for their service, despite leafleting, contacting nursing homes and singing to the senior nurse at a local hospital as a demonstration.

Ms Greenwood said: “We’ve done it twice. We don’t have a lot of experience.

“We’ve also sung at two memorial and funeral services. One of them was a person that we had sung to a week before she died.

“The people we sang to were both women over 60. One of the ladies had dementia, she wasn’t able to give us feedback, but her husband said it was a lovely experience.

“The other lady was able to give feedback, but it was quite brief. It was like ‘it was lovely’. They’re obviously busy, occupied with what they’re going through.

Ms Greenwood now plans hold an open day in Glasgow in September, in the hope of raising more interest.

She said: “It’s an opportunity for people to come and experience the choir and it helps them to decide whether they want to do it or not.”

Meet Stanley – the Superdog who can ‘fly’