A TEACHER who was filmed slamming a child into a wall has revealed the stress of caring for his terminally ill wife and dealing with his daughter’s brain tumour diagnosis led to him “losing the plot”.

A hearing was shown CCTV footage of Christopher Butcher calling a child a “dwarf” and pushing him into a wall during the incident at a school in Aberdeenshire in 2013.

The 61-year-old admitted all charges against him in front of the General Teaching Council for Scotland on Monday, and has now spoken of the circumstances surrounding the incident.

Speaking from his Strichen home yesterday, Mr Butcher said he has been under “considerable personal stress” for many years, which led to him “losing it” with a misbehaving pupil.

Mr Butcher told his local newspaper: “It’s something I’ve fully admitted and fully accept. What I did was professional misconduct, ought not to have happened and I should have thought better.

“The reason that I went all the way to the tribunal was that I did not want to be instantly struck off and thought of as an unfit person to teach because this is the first thing that has happened in 31 years.

“I felt there were other circumstances that should be brought into play to give a more holistic view of my career as a classroom teacher.

“My wife is terminally ill and some years ago my daughter was diagnosed with a brain tumour. She had lengthy surgery and did recover from that but I’ve been under considerable personal stress for many years.”

Mr Butcher told the panel he was signed off several times during his career for depression and now cares for his wife Sheena. 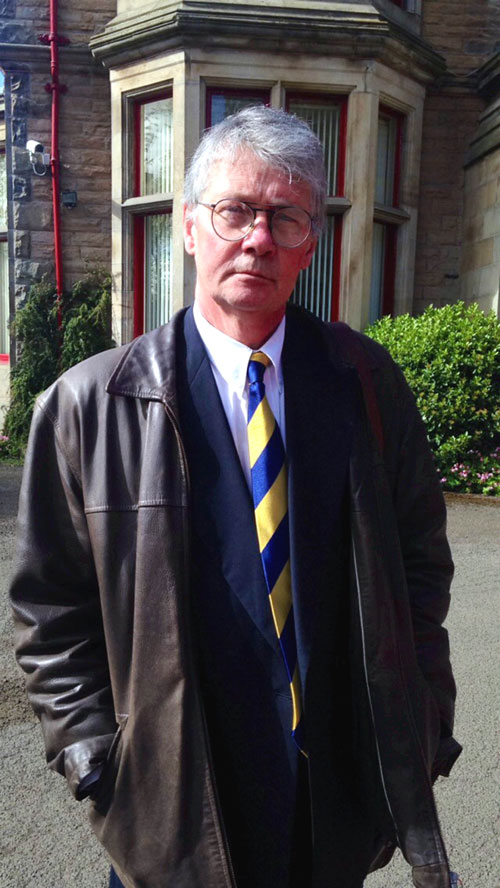 He said these factors “contributed in no small way to what happened” during the incident on June 24, 2013.

“It was the perfect storm of a situation and I lost the plot,” he added.

The two-minute CCTV clip shows the learning support teacher bringing a “really small” pupil into the corridor at Fraserburgh Academy.

No sound was recorded, but it is clear that Mr Butcher is shouting at the student as he stands within 30cm of the teenager with his arms crossed.

The pupil tries to move away, but as he turns to walk off Mr Butcher grabs him roughly by the shoulder, swings him around and slams him into the corridor wall.

The student hits the wall with some force, and his body shakes from the impact. Mr Butcher then stands over the pupil – who comes just above waist height – and continues to berate him with his hands on his hips.

After another 30 seconds of shouting, other teachers appear in the corridor, alerted by the noise. Mr Butcher then calms down and walks back into the classroom, where he was assisting a supply teacher during an English lesson.

At the hearing, he admitted that the video “still had the power to shock and perplex him”, and that he was “dreadfully ashamed and upset to see himself acting in such a fashion”.

He accepted all charges, which stated that he called a student a “dwarf”, “stupid” and “inhuman”, and “grabbed him by the shoulder and pushed him back into a wall with a closed fist”.

Mr Butcher has since said he was touched to find out that two former pupils had written to the GTCS panel in his defence.

The teacher, who had a clean 31-year teaching record previous to the incident, was immediately dismissed by Aberdeenshire Council at a disciplinary hearing following the incident.

Mr Butcher appealed the decision, but then decided to resign from his position at the school.

Andrew Griffiths, head of education and staff development with Aberdeenshire Council, said: “Mr Butcher did not demonstrate any remorse at his disciplinary hearing.

“There was not the level of emotion I would expect from someone in his position. I felt he was blaming the pupil for the prolonged attack.

“From looking at the CCTV we can see that the pupil looked scared and as if he was backed into a corner and trying to get away.”

The GTCS panel decided this week that Mr Butcher’s fitness to teacher was “impaired”. But they have yet to decide what action to take. This could include finding him unfit to teach and striking him off.

But Mr Butcher made clear this week he had “no intention” of teaching again and considered himself retired.