A TORY MP has been condemned after boasting on Twitter that he got Charles Kennedy’s old Westminster office.

The MP for Newbury, Berks, faced an immediate barrage of online criticism for the comment in which he gloated about his “great view over the Thames”.

Mr Benyon deleted the tweet, insisted he was a “great admirer” of Mr Kennedy, and was passing comment on the space available for MPs’ offices.

His Tweet, posted at 8.30pm on Monday, read: “I have been given Charles Kennedy’s old office. Great view over Thames. First office didn’t have a window.”

News of Mr Kennedy’s death emerged at about 6am yesterday.

Theodor Adorno wrote: “How nice for you…did you know he has died?”

Jemmy Button wrote: “Take this tweet down Richard ffs. Yes I know you wrote it hours before the news but now time to show some respect.”

Mr Benyon replied: “Just heard the news. Yes, will take tweet down. It was posted yesterday. No disrespect intended and sad to hear today’s news.” 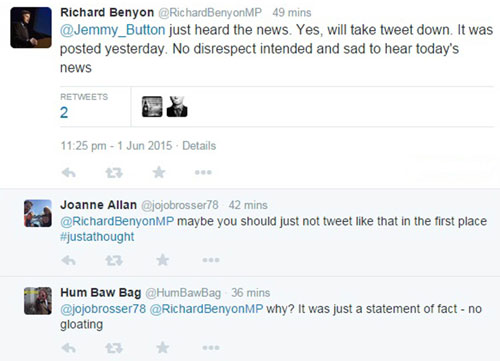 Jane Calveley hit back with: “So just gloating at pain of lost seat then? You could take a lesson in humility and being a good parliamentarian from him.”

Jo Richards ?added: “Richard Benyon had tweeted a very gloating tweet about having Charles Kennedy’s old office. He did tweet it before Charles died but bad taste.”

The former British Army officer said yesterday: “I had no idea of the tragedy that was going to happen. I am a great admirer of him. 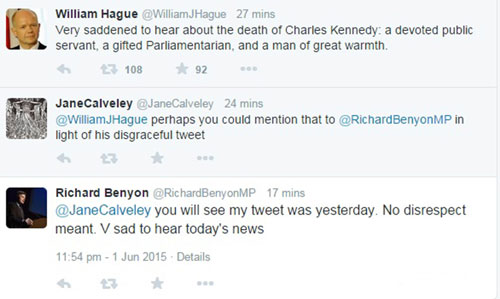 Referring to the criticism he had received, Mr Benyon added: “I understand people, when a tragedy like this happens, they feel raw.”

Mr Benyon said his comment was about the “the fact that most MPs have a broom cupboard with no windows” as an office.

Mr Kennedy’s last tweet was on May 9, just after losing his seat to former investment banker Ian Blackford from the SNP.

Mr Kennedy, who has served the constituents of Ross, Skye and Lochaber for 32 years as an MP, posted: “Thank you to the generation of voters, and then some, who put their trust in me.”