Memories flood back of #GrowingUpScottish

THOUSANDS of Scots have taken to Twitter to reminisce about what it is to grow up in Scotland with hilarious results.

#GrowingUpScottish has been trending since Wednesday as those north of the border dredge up memories from the horrors of compulsory country dancing to getting a “skelp”.

Talk about unique turns of phrase used by parents, the subtitles of the Scottish dialects often misunderstood and odd school customs have dominated the twittersphere for hours.

Josh Speirs reminisced: “Yer maw referred to the light in the living room as ‘the big light’.”

Another Twitter user, Amy, wrote about her childhood: “Having that auntie who wisny really yer auntie, she was just yer mum’s pal but ye still called her auntie.” 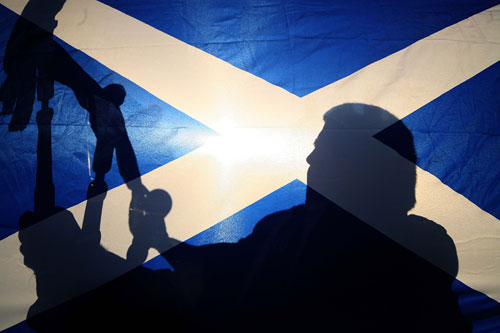 The web has been awash with the sometimes strange and wonderful world of #GrowingUpScottish. The trip down memory lane continued with school memories.

Someone with the twitter name Huey Silver Fox wrote about: “Learning the Dashing White Sergeant and Strathspey as part of yer school curriculum.”

While Graeme Eaglesham brought up the school rainy day classic: “Playin heads down thumbs up and lookin at their shoes!”

While playing was also a bit different in Scotland.

Scotzine tweeted: “Coming home from school with your knees and thighs bleeding and grit embedded into the wounds after playing fitba on red ash.”

And no childhood in Scotland was complete without: “Making Halloween lanterns out of neeps because pumpkins hadn’t been invented,” as brought up by Woodcutter Billygoat.

Telly was also a different matter for kids #GrowingUpScottish.

While Fraser Forsyth spoke of: “Dreading the ‘Except for viewers in Scotland’.”

The unique Scottish turn of phrase has also featured heavily.

“You’re either OUT or you’re IN,” said Janey Godley. “Makes sense ONLY to people who were #growingupscottish.”

While Aurelius recalled: “The struggle to pronounce the name ‘Karl’ without sounding like a gimp or saying ‘Carol’.”

And some things never change.

Craig Galloway tweeted: “#GrowingUpScottish when the DJ plays Loch Lomond at the end of every party.”