JUDY MURRAY has found a new way of drinking classic tennis cocktail Pimm’s – through a drip.

The tennis mum, who during Wimbledon tweeted about her glass of Pimm’s having too much foliage, has found a way to cut out the greenery all together.

During her son Andy’s nail biting battle with French man Gilles Simon on Sunday she tweeted: “I wish someone would invent intravenous Pimms. #DavisCup”

Just moments later one of her followers replied with a mocked up image of the 55-year-old from Dunblane sitting in a hospital bed with a bottle attached to a drip.

The picture has Judy with her fist clenched in a typical Murray celebratory pose. 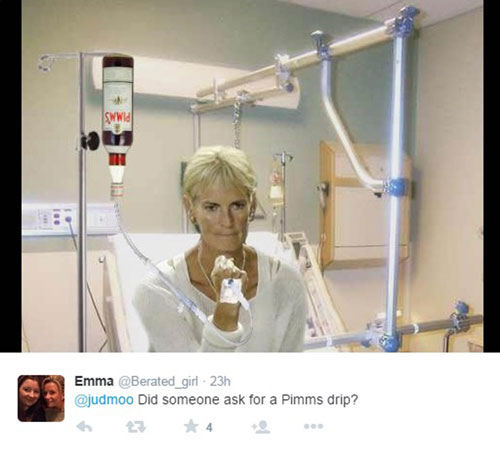 Beside it Emma, who goes by the twitter handle @Berated_girl, wrote: “Did someone ask for a Pimm’s drip?”

Delighted Judy retweeted the image, tweeting: “You ask for a Pimm’s drip…….and what do you get? A Pimm’s drip. #DavisCup. Cheers @berated_girl.” 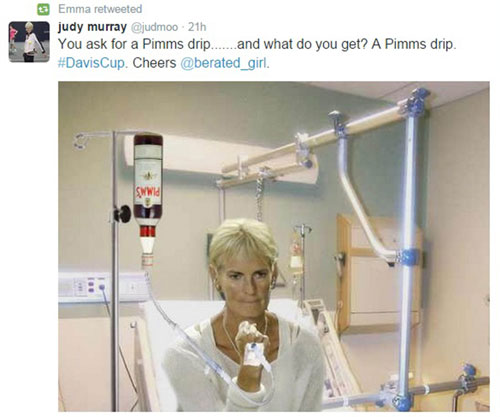 The unusual picture got a much better response than the efforts of bartenders at Wimbledon.

During the championship Judy posted a snap of her Pimm’s which had massive sprigs of mint hanging out the glass. 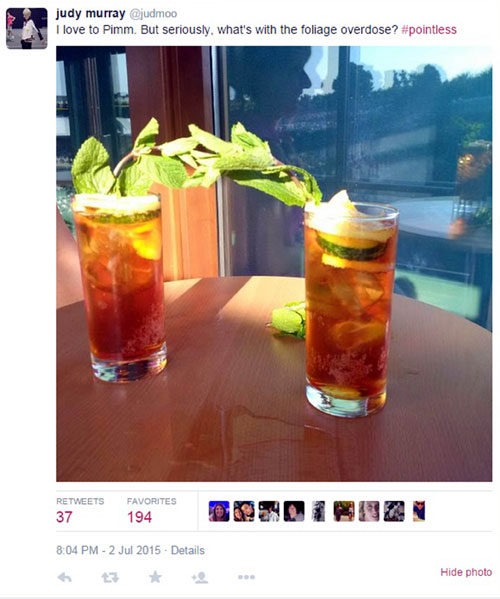 Next to the photo with the grass courts of the All-England Club in the background she wrote: “I love to Pimm. But seriously, what’s with the foliage overdose? #pointless”