GORDON Ramsay’s teenage son has shocked his father with a sudden growth spurt.

The 15-year-old’s blond hair, dimples and square jaw have see him referred to as the ‘mini-me’ lookalike of his chef father.

But now Jack Ramsay is almost as tall as his 48-year-old dad and is giving him a run for his money in the muscle department too.

Gordon, the Scottish chef who now spends a lot of his time in LA, posted a picture of himself with a grown-up looking Jack on Instagram yesterday (Wednesday).

Next to the shot of the two of them in the kitchen, arms folded and their muscles on show, Gordon wrote: “Somebody’s catching me up…”

In the past the pair have been snapped wearing identical outfits and matching hairstyles, while the sporty duo are also know to train together on the beach.

The snap attracted hordes of comments on Instagram and Twitter as fans of the Kitchen Nightmare star were taken aback by Jack’s grown-up looks.

“Oh my God!!! There is another one!” wrote Maria Gonzalezg on Instagram.

And Gosia Sousa added: “He is a good looking lad (the son I mean).”

While on Twitter Selena commented: “Muscle game is strong.”

Someone with the account name Grandpa Ken said: “Wow. He has grown fast. Soon he will be taller than you Gordon.”

And Pamela Frew ?wrote: “Father and son,like two peas in a pod.” 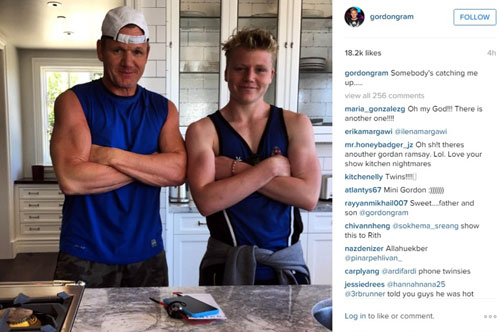 Earlier this month Jack was snapped with going to the gym in West Hollywood with his close friend 16-year-old Brooklyn Beckham.

The teenagers have know each other for years after their parents became good friends.