A GLASWEGIAN has delighted Irn Bru fans by producing a step-by-step guide of what happens when an Englishman enjoys a can of Scotland’s favourite drink.

David McSweeney, who runs online media site Favrify, decided to create a tongue-in-cheek version of a popular infographic showing what happens when a person drinks a can of Coke.

The hilarious guide features a picture of The Simpsons character Groundskeeper Willie, and suggests that after an hour you will be “transformed” into a Scot.

It reads that in the first ten minutes “you will start to feel a little stronger, braver and self-assured. Your own accent suddenly annoys you.”

After 15 minutes: “You notice an interview with David Cameron on the news and feel compelled to throw your shoe at the TV. You don’t know why.”

After 20 minutes: “You look in the mirror and notice you are a little more handsome and muscular than before. Your voice starts to deepen.” 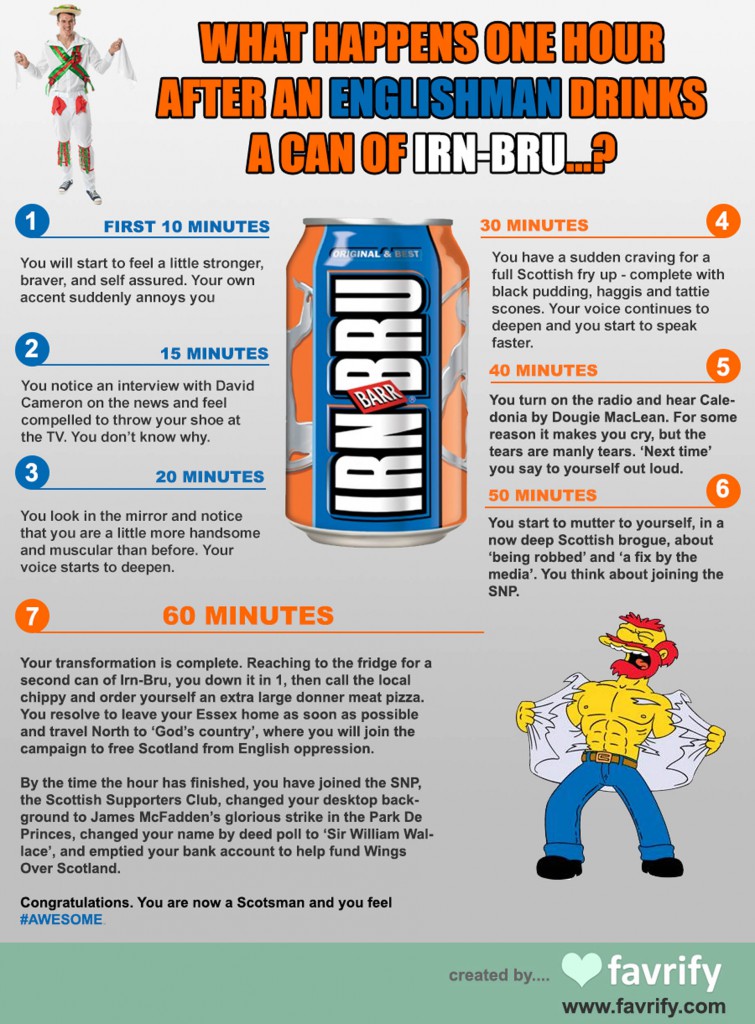 After half an hour you have a “sudden craving for a full Scottish fry-up, complete with black pudding, haggis and tattie scones”, and after 50 minutes you “think about joining the SNP”.

Finally, an hour after consuming the bright orange drink, your “transformation is complete”.

Apparently, if you reach for another can, you’ll then “order yourself an extra large donner meat pizza”, “resolve to leave your Essex home” and “travel to God’s country”.

David, who shared his created online earlier this week, said it has had an “enormous” reception from Irn Bru fans.

“It’s been shared thousands of times in just a few days,” he said. “I just did it as a laugh – I saw the popular Coke and Diet Coke infographics and thought we could put something of our own together.

“It’s tongue-in-cheek and not very scientific, but a lot of people seem to be finding it funny.”

The infographic attracted a wealth of comments from people all over the world.

Elton Thrussell, from Aylesbury, Buckinghamshire, wrote: “I should drink a can when I come up to fit in.”

The Coca-Cola infographic, released last month, shocked readers as it explained how blood sugar spikes, your pupils dilate, your body stores sugar as fat and then you “crash” as your body loses nutrients after drinking a can.

A similar Diet Coke guide is even more surprising – as it explains that it affects you in the same way as cocaine within an hour.