A BRAZEN motorcyclist in Aberdeen sped past a police vehicle at about 40 miles an hour – while doing a wheelie.

Despite having passed within metres of the marked car the officers inside made no effort whatsoever to give chase. 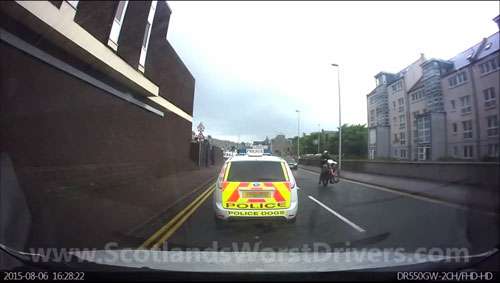 Instead the police carried on in the opposite direction – slowly crawling towards an intersection.

The shocking incident, which happened on Thursday afternoon, was caught on a dash cam by another driver on South College Street in Aberdeen. 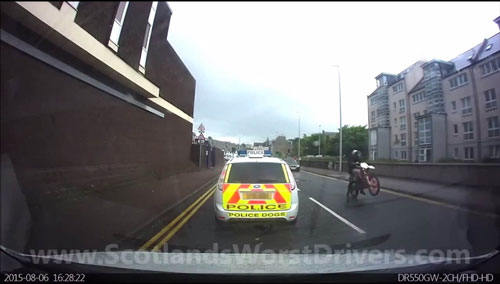 The footage was shared with Scotland’s Worst Drivers by ABZ Car Cam who said: “Two on a bike pulling wheelies during rush hour and the Police didn’t even flinch!”

The motorcyclist – who was carrying a passenger – can be seen whizzing past and looks to have been going considerably faster than the believed speed limit of 30 mile per hour. 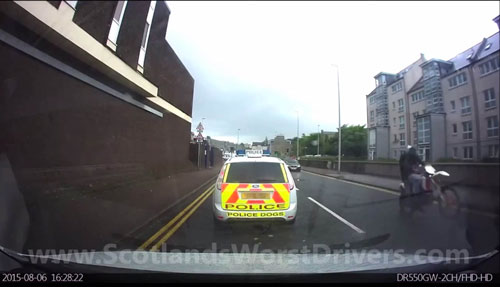 It even appears the bike was overtaking a car while performing the dangerous maneuver.

A spokesman for Police Officer insisted it would have been more dangerous to have attempted to stop the bike. 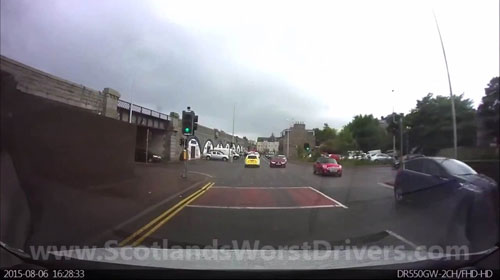 And now they are asking the public for help to catch the dangerous biker.

In a statement a spokeswoman said: “Police Scotland can confirm that officers were made aware of a motorcycle carrying out a ‘wheelie’ manoeuvre in the South College Street area.

“At this time it would have created further risk to the public to pursue the vehicle.”

She continued: “Further enquiries have been carried out including reviewing CCTV footage and work is ongoing to target the anti-social use of motorcycles in Aberdeen as part of Operation Trinity.”

And added: “Anyone who has information in relation to this incident or anti-social behaviour involving motorcycles is asked to contact police on 101.”

Paul Watters, Head of Roads Policy at the AA, said the wheelie could have had disastrous results.

“This certainly was a pretty stupid thing to do on the part of the motorcyclist,” he said.

“It was in an urban area, a pedestrian could easily have stepped out between the queuing cars and the rider would have been in no position to stop or take avoiding action due to not being in proper control of the machine.”

Mr Watters continued: “It would have been very difficult for the police car to have pursued the machine and, in fact, its line of sight of the event may have been less clear than that from the dash-cam vehicle.

“The motorcycle was travelling at some speed so may well have slipped out of sight of police quickly in any event.

“The police have to make instant judgement calls in these situations all the time and are skilled at doing so.”

He added: “It is clear from the behaviour of the motorcyclist that their bravado will one day be their downfall and that next time the police may well get their man or they may come to grief – hopefully without injury to themselves or others.”

The footage shows the biker “completely disregarding his safety and those around him” according to one road safety charity.

Sarah-Jane Martin, spokesperson for Brake, said: “In the UK motorcycles make up about 1% of all traffic but account for around 18% of deaths and serious injuries.

“There are simple steps that drivers of motorbikes and vehicles can take to prevent tragic collisions.

“It appears this driver is showing complete disregard for his safety as well as those around him.”

She added: “In terms of pursuing the motorcyclist, we accept Police Scotland’s explanation.”