PETS across the globe are getting in on the selfie phenomenon.

Curious cats, dopey dogs and even ham-fisted hamsters are snapping themselves on their owners’ mobiles – with hilarious results.

The pictures, which include a close-up of a one-eyed cat, all were produced when clumsy pets stood on their owners’ phones or iPads. 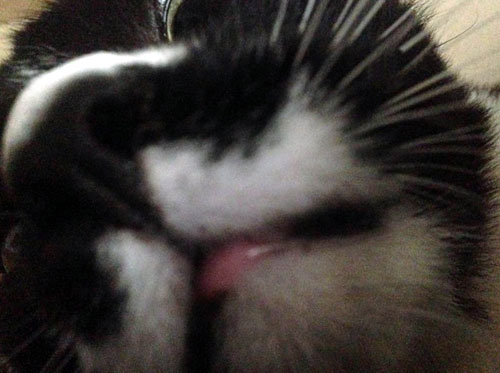 The results are varied – some pictures show cats looking down into the camera with their chin appearing extremely enlarged, and in others a dog’s nose takes up most of the photo.

In one snap, a cat can be seen standing on a selfie stick, which in turn took its picture as it looked innocently on.

In another only half a dog’s head can be seen with its eyes lit up – a result of the flash from a camera.

A hamster even managed to capture a blurry selfie as it stood on a phone.

The pictures come from around the world, from Glasgow to Pennsylvania in the US.

Captions with the snaps show that owners found the pictures highly amusing.

One girl, Lucee, wrote: “My dog stood on my phone and took a selfie. I’m dying.”

Another Twitter user, Sophie Ramsay, said: “Now my one-eyed cat has stood on my phone and taken a selfie.”

A selfie is a self-portrait photograph, usually taken with a digital camera or phone at arm’s length.

They are made to appeal flattering and casual, and in recent years have become a social media craze.