Deadline News photographer Wullie Marr writes about his treatment at the hands of aggressive anti-press stewards at a recent pro-independence rally in Glasgow.

The Hope Over Fear rally was held one year on from the independence referendum in Glasgow’s George Square on September 19.

Very little effort was made to accommodate the press, and stewards became confrontational, eventually banning Wullie and other press from the pit entirely.

What follows are Wullie’s words. 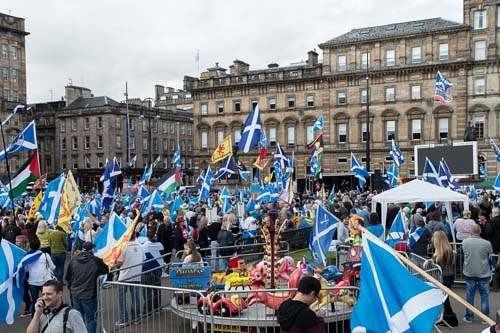 Hope Over Fear? Or Fear Of Impartiality?

Might not make a lot of sense, but it is a question I ended up asking myself on Saturday afternoon.

I’m a card-carrying SNP member, a staunch Nationalist, and an independence supporter. A year on from September 18, 2014, there is still as much belief, if not more, in our country standing on its own.

The rally in George Square on Saturday proved that – despite being refused permission by Glasgow Council. This effectively made the rally an illegal gathering but thousands defiantly turned up, to show their support for the independence cause. Hundreds of flags, kilts and painted faces give photographers plenty of scope for bright and colourful pictures. Unless you wanted to get into the  ‘pit’ around the stage. This area, at ANY other event is pretty much the exclusive domain of the press photographers and TV cameramen.

But not at a Hope Over Fear rally.

Firstly, on arrival next to the barriers, having spent a bit of time in the crowd, photographing happy faces, banners and flags, several colleagues and I get asked if  we were on the list.

After a bit of humming and hawing, and toing and froing, we were told to come back at a specified time, and we MIGHT get in, provided we had a valid Press Card.

On returning, at the time instructed, we were allowed into the ‘pit’. Despite being a decent-sized area, it is immediately evident that the people who were on the list, had no knowledge of working in a ‘pit’, as the number of tripods and stands with iphones and ipads, home video equipment, all combined to make the area hazardous. Despite this, we all got on with the job in hand and started photographing the crowd, who were more than happy to see us, and pose for pictures. We also photographed what was going on on stage, including main organiser and the voice of Hope Over Fear, Tommy Sheridan, giving another passionate address.

So far so good, but what you need is a bit of height to show how large a gathering actually is. So a number of us headed for one of the statues which are inside the fenced area. As two of my colleagues got up onto the base of a statue to gain a better vantage point, and I was getting ready to join them, an over zealous “steward” (and that’s putting it kindly) approached and told them to get down.

Now it may have been his aggressive attitude to begin with, but my colleague from AFP (Agence France-Presse) said he wasn’t moving as he was about to take some pictures. I appreciate that the independence campaign has long spoken about media bias, but what happened next certainly isn’t the way to win that particular battle. Upon being told “no”, the ‘steward’ – resplendent in blue-mirrored sunglasses – upped the ante and started getting threatening, not just in his manner, but also in his words. He, on  more than one occasion, threatened actual physical harm to the photographer, and also grabbed his leg at one point.

The photographer then asked me to call the police. As I was calling, two officers actually arrived on one of their circuits of the square. At this point, the AFP photographer agreed to come down, and speak to them.

As we as a group spoke to the police, and the photographer gave a statement, we could see supporters climbing all over the other monuments on the square, without objection from the many other stewards mingling in the crowd. The organisers then informed us that we were banned from the “pit”. To be clear, the “we” included Deadline News, AFP and various freelance photographers who had initially been allowed in. The BBC and even the openly “Yes” supporting Sunday Herald were not permitted entry to the pit at any stage.

Media bias? You think? And holding an illegal gathering, in a public square, effectively banning media, threatening media, who by the way, have a good enough legal knowledge, of what we can and can’t do, to get us through our daily work is definitely the way to win them over.

We, the photographers, are the thin end of the wedge in the media world. We come and take a true representation of what is happening. Once that is sent out to news outlets, we cannot guarantee how, or even IF, the pictures will be used.

One thing is clear however: banning us and threatening us is not going to win any favour with any part of the media.

To quote the movie Field of Dreams, “Build it and they will come”. On Saturday, they built it, and they came.

But ban them, and they will not come. They will lose interest, and without these events being reported and photographed for and by the official media outlets of the country, they will start to dwindle, and more importantly, drive a wedge between media, independence supporters, and a more radical anti establishment wing, like Hope Over Fear.

I, as a lifelong proud Scot, and independence supporter, am saddened at that thought.

There is a pattern starting to emerge here. The bias seems to be heading in the opposite direction, and unfortunately, people outside looking in aren’t getting the full story, and it’ll be the indy extremists who cause the death of the indy movement. 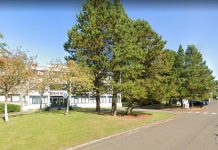