AN old video of a Spanish couple dancing has been turned into a hilarious guide to surviving in modern Scotland.

The original clip, which appears to be from the 70s or 80s, shows the middle-aged Spaniards going through rudimentary dance steps.

But a Scots wag has provided comedy subtitles and renamed the clip: “Learn how to dance like you’re born and bred in Moray.”

The two-minute video, which now gives “instruction” on stepping over dog mess and Tennents cans and going to a “Buckie disco”, has been viewed almost 130,000 times.

It was created for a Facebook page called The Moray Neep which specialises in comedy videos and pictures.

The retro clip shows  the man, dressed in white flares and with bouffant hair, learning three cringe-worthy dance moves with his partner. 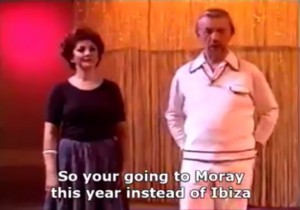 The opening title reads: “So you’re going to Moray this year instead of Ibiza then you need to learn how to dance like a Scotsman.

“Imagine you are in Buckie Disco. This is the swagger. This is the dance a Scotman uses to attract a mate. Because they always will be holding a pint they try not to move the feet.

“Be aware some Scots also use the move when p****d and trying to aim the urinal. So try to keep to the other end of the urinal.” 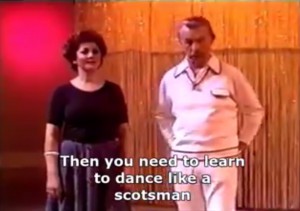 As the second move starts it sees the couple doing a side-stepping subtitled as the “Dog S***e Dodge”.

“The idea is to pretend you are avoiding the dog s***e on the pavement as you walk home from your local bar,” say the titles.

This is followed by a dance move called: “Kick the can of empty Tennants. Wipe the dog s** from your shoe. Wipe until you wouldn’t stain your girlfriends carpet. They would repeat these steps many times in real life and on the dance floor.” 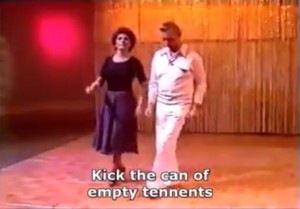 The “I’m just too cool for school wander” is next. Not pissed, just cool. “This impresses everyone,” states the caption. “Then straight into shut that door with hands full of pints.

“Really use your hips to slam that door closed. Might be their fridge door. OR the kitchen door. Or maybe just throwin’ a fart out. That’s it you are dancing like a true Scot.” 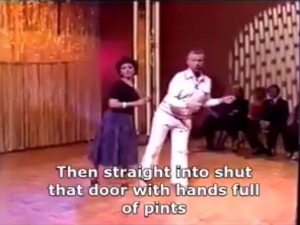 The Moray Neep said: “It’s all just a bit of fun and if I find it funny I hope others do too. As soon as I saw the couple dancing even without subtitles it was funny.”

And Ian Richardson wrote: “Having taken part in this year’s dad dancing competition in Devon I wish I’d seen this video for inspiration.”