SCULPTORS armed with chainsaws have turned a desolate area of felled woodland into a haunting tribute to the men who fought and died in the First World War.

The stumps of chopped trees have been carved into statues of soldiers, many of them based on photographs taken during the Great War.

The figures at Rozelle Park, Ayr, range from a German soldier hidden in the trees holding a pair of binoculars, to a British combatant sat on a wooden crate writing a letter home.

There is also a grave dedicated to an “unknown soldier” carved directly into a tree stump – a tribute to the many thousands of unidentified soldiers who were buried abroad.

A felled tree stump has even been turned into a soldier firing a Vickers machine gun and another into a tank.

Despite using chainsaws on Rowan, Alder, Birch and Oak, the work is so detailed that the folds in the soldier’s’ clothes can be seen, as well as facial features including a moustache.

A team from South Ayrshire Council carved out the intricate sculptures after being inspired by a selection of images from the Western Front.

It took approximately two days per sculpture for the carvers to cut out a rough outline in the wood, then go into finer detail for the finished look.

Thea Petticrew, who used to work as the service coordinator for grounds maintenance at the council, came up with the idea.

Thea realised that tree stumps – an enduring symbol of the destruction of the war – could be turned into a memorial.

She said: “Last year we were working on clearfelling a section of woodland and the idea just came to me that we could use the tree stumps to create sculptures.

“The place already looked a bit like a battlefield, with trenches and ditches, so we decided to transform some of the trees into WW1 commemorative statues.

“We wanted the wow factor and we have certainly achieved that. People who never used to come into the woodland now travel in to visit, and we even have some people leaving flowers.

“We raided the libraries to find inspiration for the figures, and the chainsaw carvers managed to replicate them in extreme detail.” 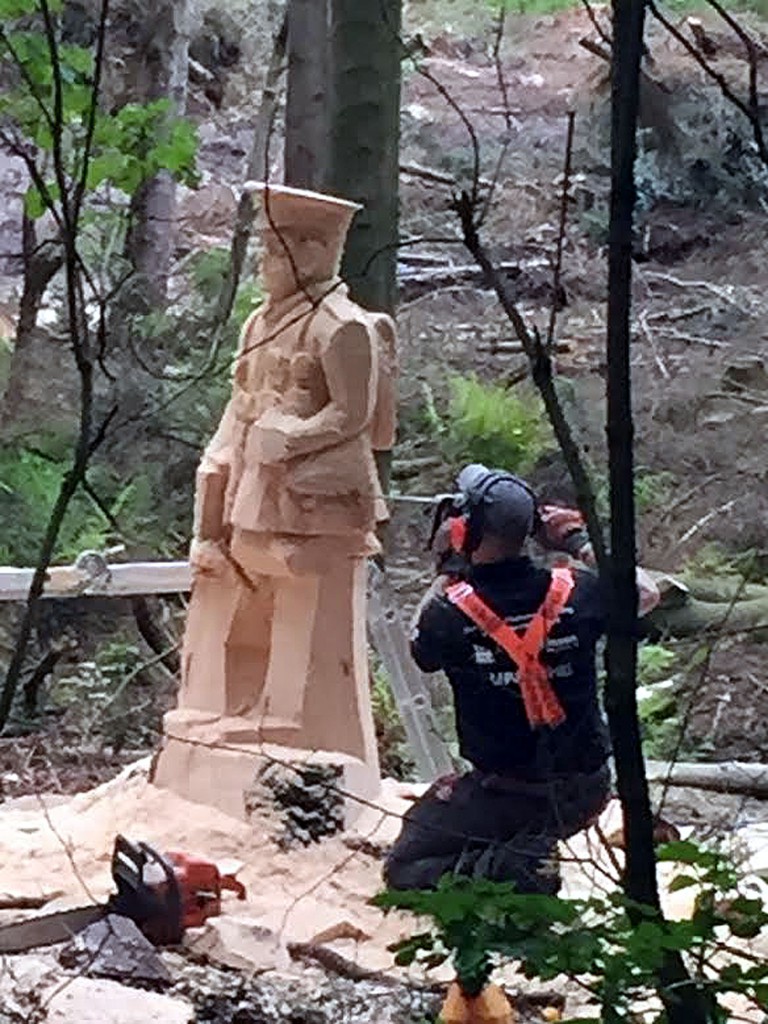 Fiona Ross, who has since taken over charge of the project, said: “We wanted to maximise the potential of the woodlands, and what was a small idea grew arms and legs and into something quite spectacular.

“We plan to turn the woodland into a place to remember all the wars, so we soon hope to have carvings to represent WW2 and other conflicts.

“The area hasn’t been cleaned so it actually looks like a bombsite. It’s very realistic.”

A new path network is being developed at Rozelle Park and native trees, including Rowan, Birch and Oak, are being replanted.

Local veterans charities, including Green Leaves and Combat Stress, will be looking after the art work by annually cleaning and oiling them.

Exhibition celebrating an artists 70th birthday will go ahead this month