Falkirk players and fans will partake in a Remembrance Day of their own at the Falkirk Stadium this Saturday when they face bottom-of-the-league Alloa Athletic.

Before the game, there will be a short commemorative service in which chairmen of both clubs will lay a wreath and a minute’s silence will be observed

Falkirk players are also to wear strips with a poppy printed onto them in memory of the soldiers who lost their lives.

The event will be staged after the club announced it will become an official supporter of Legion Scotland in a partnership that will see local veterans offered free tickets for every home match. 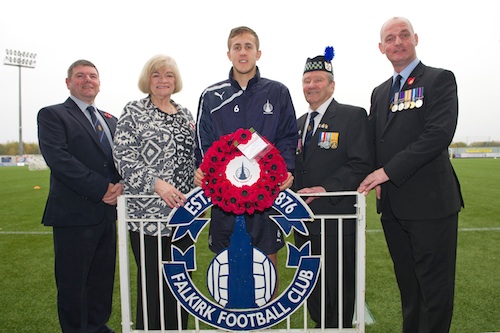 “We hope the activity planned for Saturday’s game will form a fitting tribute to our veterans and those still serving around the world. Their dedication and sacrifice should never be forgotten,” said Falkirk chairman Doug Henderson.

It will be a special day for the club as a whole but, in particular, for vice-captain Will Vaulks.

Two of the 22-year-old’s ancestors were lost in the Great War, whilst great granddad, Tom Vaulks, was decorated for his bravery fighting in France in World War II.

“My great granddad, Tom Vaulks, fought in the Second World War and got a medal for his bravery,” explained the midfielder.

“I’ve got the article somewhere which shows exactly what he did, but he basically got in a tank and ended up taking about 100 prisoners himself.

“A few years ago, my mum found the certificate for his medal, which shows exactly what happened, and since then we’ve done a bit of digging into it. 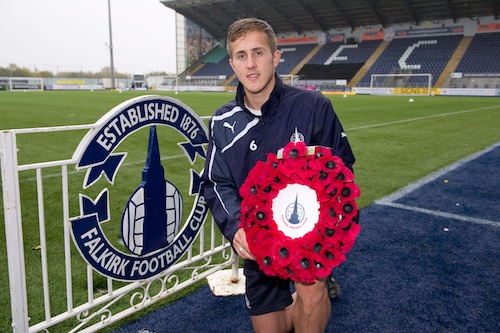 “It’s so interesting to read all about it and it’s weird to think he was just an ordinary fella. He wasn’t in the army, he didn’t choose to go in, but you had to go and fight.

“There were these average Joes who turned out to be so brave and that’s why we won the war, because of people like that, who were willing to go and do it.”

With such a family history in the services, and with another of his forebears having served in the navy, Vaulks has confessed he retains an interest in the armed forces.

And he admits delving into his family’s past has helped to put the present in to perspective.

The former Tranmere Rovers player added: “It’s unthinkable now to think that the person working in Tesco or a footballer would have to go and fight to give us the freedom we have today.

“We talk about games being a battle but it’s just a game of footie, isn’t it? You speak about it that way because that’s the way it feels on a match day, but it’s nothing compared to what went on and what’s still going on.”

The Englishman finished by saying: “We have to be grateful and we can’t let that be forgotten.”