Alan Stubbs admits Hibs fans may not see the best out of returning striker Farid El Alagui until 2016.

The 30-year-old has endured a torrid time with injuries since arriving at Easter Road last summer, initially suffering a ruptured achilles tendon last August which halted a run of four goals in his first six games and kept him out for six months.

He returned to full fitness in March and underlined his value with a memorable clipped goal in April’s 2-0 victory over fierce city rivals Hearts. However, he underwent an operation to remove a pin which aided his recovery from last season’s injury, resulting in another layoff this term. 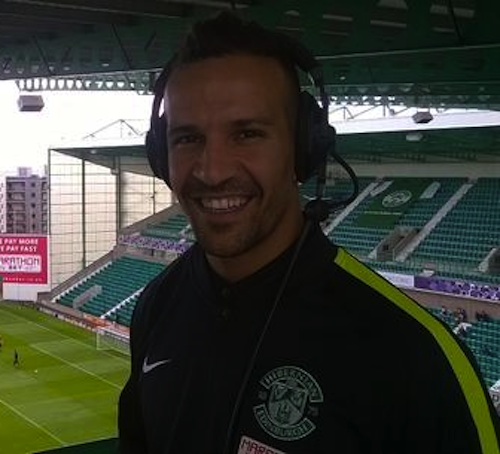 But El Alagui is well and truly on the comeback trail, having been on the bench in the Hibees last two matches, even entering the fray as a substitute against his former club Dundee United last midweek.

Stubbs, however, has cautioned against expecting too much from the ex-Falkirk and Brentford man.

Asked whether it may take until the second half of the season for El Alagui to truly recapture his form, the Hibs boss said: “It’s probably looking like that.

“He is in the squads, so he is obviously fit. He just needs a more sharpness and more strength in his legs to make a really significant contribution.

“Personally, and I’ve spoken to Farid about it, I don’t think he is ready to start a game, but as a real confidence booster, it was great to get him on against Dundee United.

“ It’s great for him because it’s been a long 14 months. It has been a difficult 14 months, as well. I’m trying to drip-feed him in, just to give him a lift and make sure he’s a part of things.”

Meanwhile, fellow striker Henri Anier is nearing his debut for the Easter Road club after making his first appearance in Hibs’ colours.

Anier, a loan arrival from Dundee United on deadline day, has been sidelined by a thigh strain but was fit enough to play 60 minutes in Tuesday night’s ‘Wee Derby’ defeat against Hearts.