A FRAUDSTER tried to con a single mother out of £6,000 using a distressing picture of a critically-ill Scots boy.

Australian Justine Clark, 27, was contacted on Facebook in October by a scammer posing as a handsome US soldier called Thomas Collins Donald.

During a sophisticated six-week scam, “Donald”, 37, bombarded Justine with romantic messages and convinced her of his military bravery in Iraq.

Justine, from Sydney, said she fell for Donald but became suspicious when he sent a picture of his badly-injured son this week and asked for $10,000 to help pay for medical treatment. 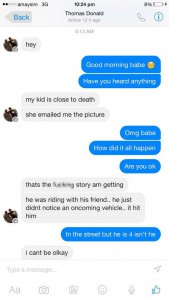 She eventually realised that the image was of Harry Davies, from Pencaitland, East Lothian, who made headlines two years ago after surviving what doctors called the worst head injury they’d ever seen.

Harry, now aged 13, made a remarkable recovery from his injuries after he was knocked off his bike by a car driver. 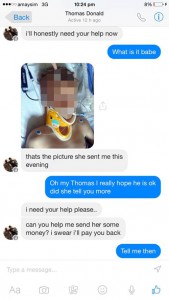 Justine, who has reported the scam to the US military, said: “I’m so mad with myself. I was really making a future with this person – like I felt really close.

“A part of me feels, ‘How did i let myself get sucked into it? How silly can I be?’”

She added: “As I’m a parent myself I feel for Harry’s family.

“To have their son’s pic used for scamming, it’s sad. These people don’t care.” 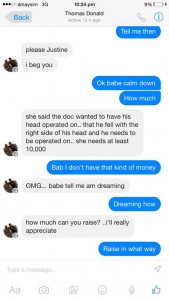 Harry’s dad, Nick, said yesterday: “This is the downside of the internet. There are pictures out there, people just take one and go, ‘This is my son’. There’s nothing you can do about it.

“I’m just glad the woman didn’t fall for it.”