TWO daredevil pilots who caused a sensation by flying under one of Scotland’s tallest bridges were French tourists – who will escape prosecution. 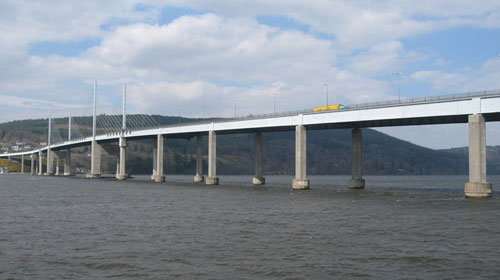 The incident – like something out of the computer game Grand Theft Auto – happened at the Kessock Bridge, north of Inverness, in May this year.

Astonished eyewitnesses reported seeing two aircraft flying under the 240-metre main span of the bridge, despite there being only 27 metres between the bridge and water.

But the Civil Aviation Authority (CAA) yesterday (Fri) confirmed it would be taking no further action over the daredevil stunt.

A source close to the investigation revealed: “The whole matter sort of died a death really because the two gentlemen involved were in microlights and they were from France.

“It caused a bit of a kerfuffle – one or two people complained. I know they had been on a tour of the UK. All I know is that they were microlight planes.”

The source added: “It wasn’t designed to be any sort of record breaking event. I think they came over from France in their airplanes, as people often do.

“Shortly after passing under the bridge they were home in France in a couple of days.”

Asked about prosecution, the source said: “It would cost more than it was worth.”

Aviation laws state that aircraft must not be flown closer than 150 metres (500 feet) to any person, vessel, vehicle or structure without permission.

A CAA spokesman said: “We can confirm that the CAA will not be taking any further action in regard to an alleged low flying incident under Kessock Bridge in May this year.”

One user of an online chat forum for pilots recently wrote online that the incident was an accident rather than a deliberate stunt.

He wrote: “This morning I had the pleasure of meeting the two guys who flew under the bridge.

“They were on the homeward journey of an impressive trip from the Continent almost to the tip of the UK and back again, one in an open cockpit.

“The bridge incident was not deliberate but forced on them by a combination of being caught in a down draught, not being on the same frequency as the seaplane flying above them and losing sight of him so not able to risk climbing in time to avoid the bridge.”

A police investigation into “ possible unofficial aeronautical acrobatics” was launched in May after the incident was reported.

Around 30,000 cars pass over the Kessock bridge daily. The two aircraft were reported flying under it shortly after 1pm on May 27 then continuing on alongside another plane.

Pictures of the three flying over Inverness later appeared in news reports, but it was not known who the pilots were.

One eyewitness at the time said: “If they had hit the bridge, it would have been unthinkable.”