John McGinn may have picked up ‘silverware’ in the form of the accolade for the Championship player of the month, but the Hibernian midfielder has revealed how he will treasure his meeting with a young supporter who passed away last week.

Tragically, the 14-year-old lost his fight for life on Friday night after being flown to Great Ormond Street in London earlier in the week.

McGinn has confessed the news of Brandon’s passing hit him ‘like a ton of bricks’ and has vowed to do all he can for the teenager’s family as they come to terms with their devastating loss. It is a shattering episode the summer signing insists has hammered home to him that there is more to life than the football he is lucky enough to call his job.

“Last week I found out that Paul Kane wanted me to go along and meet this boy, which I’m always happy to do.” he explained. “He was nice and bubbly and talking away. He was Hibs daft and he was wearing his top when we met.

“I gave him one of my strips framed and then, on Friday, when I came out of the cinema, I learned that he had passed away.

“I couldn’t believe it – it hit me like a ton of bricks. It was so sad and that puts football into perspective.

“All of the boys want to get the win for him on Saturday – we wanted to do it for him at Cappielow at the weekend. We’re all thinking about his family and his friends.

“It’s not a nice time but it was a pleasure for me to be able to put a smile on his face in his last few days. That’s something his family will treasure and being able to meet him is something I’ll always treasure.”

Such visits to children in hospital are fairly commonplace amongst clubs at this time of the year, with Christmas helping to bring that wider perspective for players in danger of forgetting the privileged position they enjoy.

However, for someone still just 21, McGinn yesterday displayed a humble willingness to embrace the role expected of him away from the football pitch and training field.

“I couldn’t get it out of my head on Friday night,” he admitted. “I was affected a lot more by it than I thought I would be.

“He was an infectious character and I was so surprised by the news. I was in bits, but my mum said to me that it was good I got the chance to put a smile on his face. I would do it every day if I could. It was priceless.

“The chat we had was all about Hibs, nothing else! He asked me about the drive into training and how Jason Cummings does his hair. He said I was his favourite but that Jason wasn’t far behind!

“He was a massive, massive Hibs fan and all he wanted was a league-winning team to watch. He was talking about hopefully going to the Queen of the South game, which makes this so sad.

“We moan a lot as footballers but a lot of clubs do good things, at this time of year especially. We’re all willing to help in any way we can and it’s a privilege if we’re able to put a smile on some faces.

“I’m really glad I met Brandon and it’s just so sad how it’s turned out. When the funeral comes I’ll talk to his family and if I can do anything I will.” 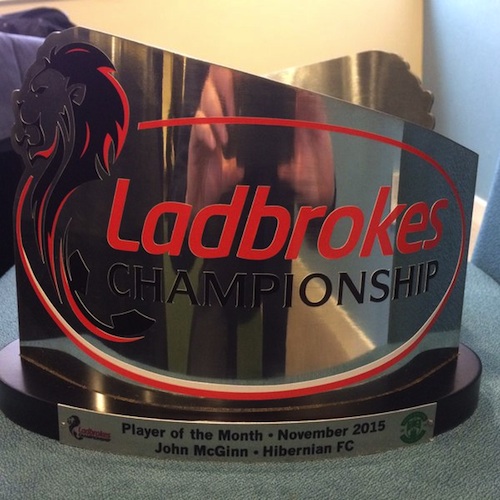 It was a sobering discussion on a day when McGinn was rewarded for some sparkling form since joining Hibs on a four-year deal in July after opting to turn down a new deal at St Mirren.

The Scotland under-21 skipper has been an ever-present for the Easter Road outfit and a massive influence on their run of form that has taken them to within just three points of Rangers at the top of the table.

Striving for perfection, the grandson of former Celtic chairman Jack McGinn is eager to add more goals to his game after targeting 10 for the season, but it is another bold prediction he is just as determined to prove was not fanciful.

“I was on the radio when we were eight points behind,” he added, “and I was asked if I believed that we could still catch the team above us, and they sniggered when I said: ‘Of course we can’.

“They were laughing at me in the studio and a few Tweets came in about it, but I think we’ve now shown that we’re more than capable of competing at the top.

“We can’t get carried away because we haven’t done anything yet. We just need to keep plugging away and continuing to get results.”

Meanwhile, head coach Alan Stubbs admits he has been thrilled with McGinn’s form since his arrival – but not surprised.

The Easter Road manager said: “I’ve got to be honest, I thought John McGinn would fit in well here. He is a really, exciting, talented young player, one of the most, exciting, young players coming through in Scotland.

“John has been outstanding for us this season. His levels of energy are quite scary to be honest – he is a player that looks tired and then he goes again.

“He has a fantastic attitude and, when I look at him, I see someone who has a real desire to be the best that he can and give himself the best opportunity. When you have that there is only one way potentially that you are going to go.”