Sam Nicholson believes Aberdeen have closed the gap on Celtic this season – but insists Hearts are capable of beating anyone on their day.

The Dons visit Tynecastle for this evening’s Scottish Cup tie sitting just three points adrift of Celtic at the top of the Premiership table and offering Hearts as tough a tie as they could expect at the fourth round of the competition. 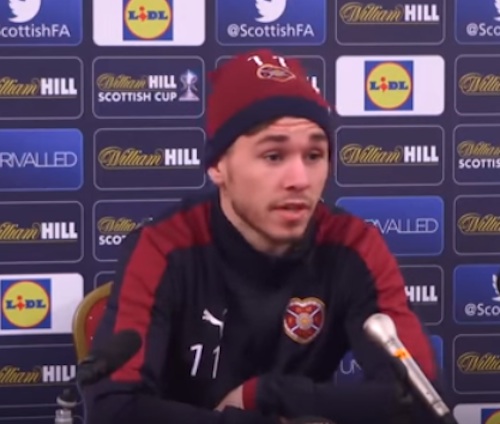 The Jambos have failed to get past this stage of the tournament, or even score a goal, since lifting the trophy in 2012, having lost to Hibernian and Celtic, twice.

However, despite two defeats to today’s opponents so far in the league, Nicholson insists the Gorgie men aim to go all the way this year.

He said: “It’s always going to be a hard game against Aberdeen. They’re a great side and you’ve seen the way they’ve pushed Celtic in the league this season.

“I think we’ve done the same with them. It was really close last time and both teams had their chances. These games can go either way, especially in the cup.

“On our game we can compete against anyone.

“Aberdeen have improved on last season and I think they have closed the gap (on Celtic) a wee bit. They play really good football and they’re improving as they year goes on, a bit similar to us.

“I think we’re improving as time goes on as well. Last season we lost 4-0 to Celtic at Tynecastle. A couple of weeks ago, we drew 2-2 with them. It’s all about improving at the end of the day

“We’ve not said we’re going to do this or that. We had targets at the start of the season and so far we’ve exceeded them.

“It’s important every season that you want to win something. Finishing high in the league is up there as well.”