Street named after fighter hero on the spot where he died

A BATTLE of Britain hero is to have a street named after him on the spot where he died 75 years  ago.

Peter Anthony Burnell-Phillips accounted for at least five German aircraft, including one he managed to bring down in the sea even after his fighter ran out of bullets.

But the Hurricane pilot died tragically in February 1941, aged 24, after his aircraft developed mechanical problems and crashed in a field near Haddington, East Lothian.

Sgt Burnell-Phillips, originally from Richmond, Surrey, flew with 607 Squadron and on the day of the accident flew from the airstrip at Macmerry, East Lothian.

During the Battle of Britain, his kills included two H111 German bombers. He also forced a Dornier Do17 to ditch in the sea by making mock attacks after running out of ammunition. His exploits earned him the Distinguished Flying Medal.

Community councillor, John Hamilton suggested the name for the street which was approved last week.

He said: “I’m pleased of the choice for the development name as it is a fitting tribute to the sacrifice made by Sergeant Burnell-Phillips.

“It’s especially poignant with it being the 75th anniversary of his death on February 9.”

After training was completed, he was posted to 54 Squadron at Hornchurch, East London on 10 January 1937, later moving to the 65 squadron also at Hornchurch.

Two years later he was forced to resign his commission after flying at rooftop level along the main street of Crowborough in Sussex for a bet.

Sgt Burnell-Phillips was buried in nearby Dirleton Cemetery. 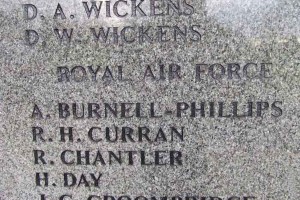 The Battle of Britain, which raged between July and October 1940, involved the famous “few” of the RAF against the might of the Luftwaffe, which was trying to destroy British air defences in preparation for a seaborne invasion.

A spokeswoman for East Lothian Council said: “We usually look to give new streets within developments a name which has some meaning to the local residents.”