HARDLINE nationalists are altering pound coins as part of a campaign to declare independence.

Blue and black stickers which read “Scottish UDI movement” – Unilateral Declaration of Independence – have started to appear on currency across the country.

The holographic stickers totally cover the Queen’s head on one side of the coin, and depict blue wording set over the outline of a saltire. 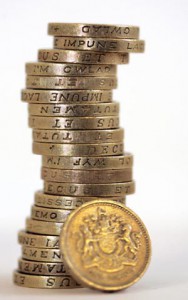 The UDI movement sprang up shortly after the independence referendum returned a strong majority in favour of staying with the Union.

One coin recently turned up at a business in Dundee. A worker, who does not wish to be named, said: “I went to buy a chocolate orange bar and pulled this funny looking coin out of my pocket.

“I must have picked it up in change without realising. It was pretty weird but it seems someone is trying to make a point.”.

Murdo Fraser, the Conservative Mid Scotland and Fife MSP, said: “After the troubles that the Yes campaign had on the currency issue, it now appears that some more extreme members have taken the matter into their own hands by defacing pound coins.

“I hope the public won’t be fooled by these tactics and that anyone who receives these dodgy designs will hand them straight back.

“The pound sterling has served us very well as a currency and we shouldn’t be defacing it.”

UDI campaigners claim the No vote was based on “fear, lies and fraud” and want Scotland to declare it’s own independence.

It refers to the referendum as a “riggerendum”.

A Facebook page for the UDI movement reads: “The Whole Referendum was based on fear and lies and fraud.

“We can not trust the democratic process where our freedom is concerned.

“ No-one is mentioning the riggerendum, it is all being brushed under the carpet. If we do not declare Independence now many will suffer.

“For the people suffering now, 2020 is a lifetime of misery away. We must act now. We have been denied our Sovereign Right and are perfectly within our Constitutional Rights to Declare Independence.”

In 2006, an Edinburgh taxi firm was criticised by the Royal Mint for attaching promotional stickers to £1 coins in an advertising campaign.

The move was not thought to be illegal.

Russell shrugs off "Minister of Fun" tag over American trips