A NORTH Sea rescue boat crew who chose to brave Storm Gertrude have shared amazing video footage of the extreme conditions they faced.

The stomach-churning video shows the vessel at 45 degrees to the horizon as it is hit by winds so strong they blew away the equipment used to measure wind speed.

The film was put together by Graeme Hatley, chief officer aboard an Emergency Rescue and Response Vessel (ERRV) 100 miles north-east of Lerwick, Shetland.

Graeme’s nausea-inducing movie shows the 150ft-long, 1,100 tonne ship bobbing around like a cork.

It is seen plunging into deep troughs between the waves and then being rocked side-to-side. The view from the bridge is frequently lost as huge waves crash over the bow.

Although the footage will make many landlubbers feel seasick, the 15-strong crew remain calm throughout. 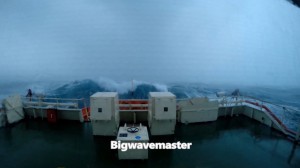 And Graeme, 49, who has worked on the ERRV for over 25 years, said they reckon they have been lucky with the weather conditions this year.

He said: “We’ve seen much worse. We were expecting it to be like that so knew two day before. So it was, ‘quick to blow, quick to go’ as we like to say’.

“We were expecting the ferocity and the wave height and had gusts of over 100 knots before we lost our anemometer.” 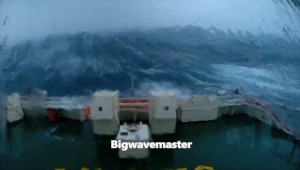 He added: “We were, for the first time ever, given the chance to run for shelter but didn’t take it since most of us have been in worse weather and for a longer time.

“A couple of years ago during something similar. It was the biggest wave I had filmed but lots of people were thinking it was CGI. Some people don’t believe it.

“The hand-held camera gets the idea of the motion and the roll of the sea.” 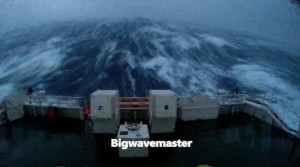 YouTube viewers commented on the clip praising the crew.

Lige Karso said: “This looks like a very good CGI. Damn you guys are ballsy.”

And another wrote: “Thank you for the great videos. You guys really work for your money.” 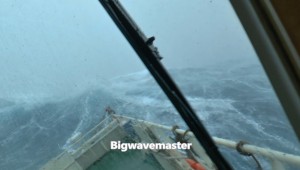 ERRVs – paid for by the oil industry – are on duty 24 hours a day, 365 days a year, to rescue anyone from offshore installations.

In 1988 they rescued over a hundred people from the North Sea oil production platform, Piper Alpha following a huge explosion which killed 167.