Hibernian head coach Alan Stubbs has accused referee John Beaton of “spoiling” last night’s breathless Edinburgh derby – but that did nothing to temper his joy at seeing off Hearts.

Cummings, John McGinn and Anthony Stokes all threatened for Hibs, while Abiola Dauda and Juanma Delgado both saw goals disallowed for offside during a thoroughly watchable Scottish Cup fifth round replay. 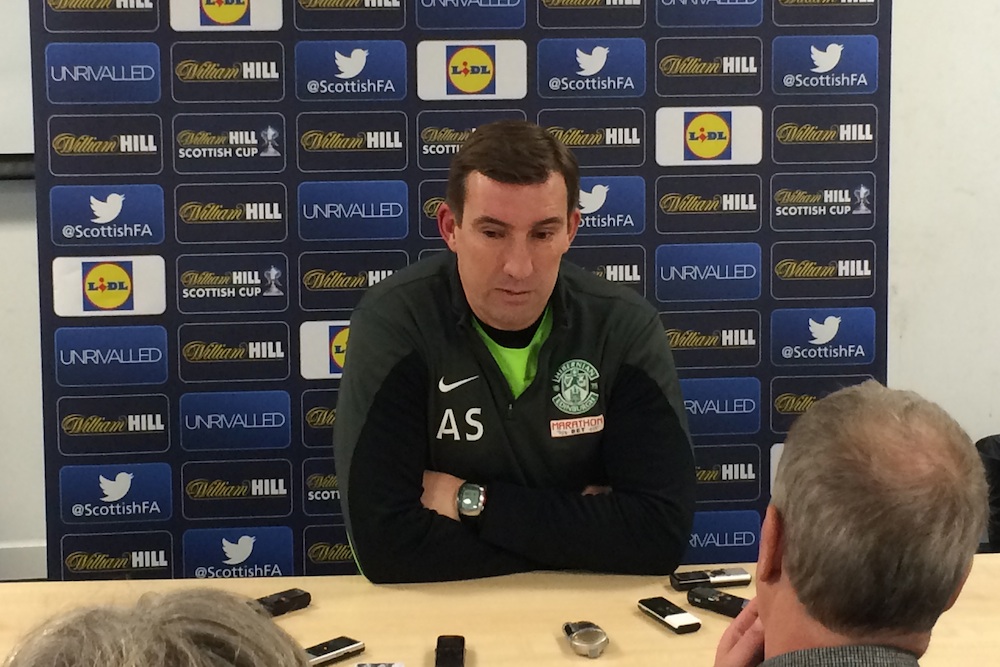 However, the contest descended into bedlam during a 90 second period when Blazej Augustyn received his second yellow card for dissent, before Cummings was also dismissed for kicking the ball away, having been cautioned for celebrating his goal in front of the away end.

With the final 15 minutes played with 10 against 10, the game lacked the same fluency, nevertheless Stubbs was proud of a thoroughly deserved win over their city rivals.

He said: “With Jason’s first booking, I didn’t think he did anything wrong apart from stand there. I don’t think he made any actions towards their fans and he stayed on the pitch. With the second yellow, I think he has been booked for kicking the ball away.

“I’m lead to believe he was trying to fetch the ball and didn’t kick it away. I’m judging from what people are telling me, but I’d say it was a bit harsh.

“I thought the red cards actually spoiled the game a little bit. I thought they were soft red cards. I don’t want to see any players sent off and I thought it affected the momentum for both teams. But, we won – so I’m delighted.

“Hearts put us under pressure in the second half and we have contended with that and got the result we all wanted. It was a close game between two good team but, when you look at it, I believe we created the clearer chances.

“We had to deal with some difficult deliveries into the box and second balls. We knew there would be times we would be under pressure because Hearts are a good team. We have just beaten the third best team in the country right now.”