AN AWARD-WINNING author has been hilariously taken to task about her writing style – by a six-year-old fan.

Joanna Nadin, who worked with Olympic hero Sir Chris Hoy on his Flying Fergus series of books, was challenged for starting a sentence with the word “And”.

Isabella had been learning about the use of conjunctions in school and decided to question the top author when she noticed that the word ‘And’ had been used to start a sentence. 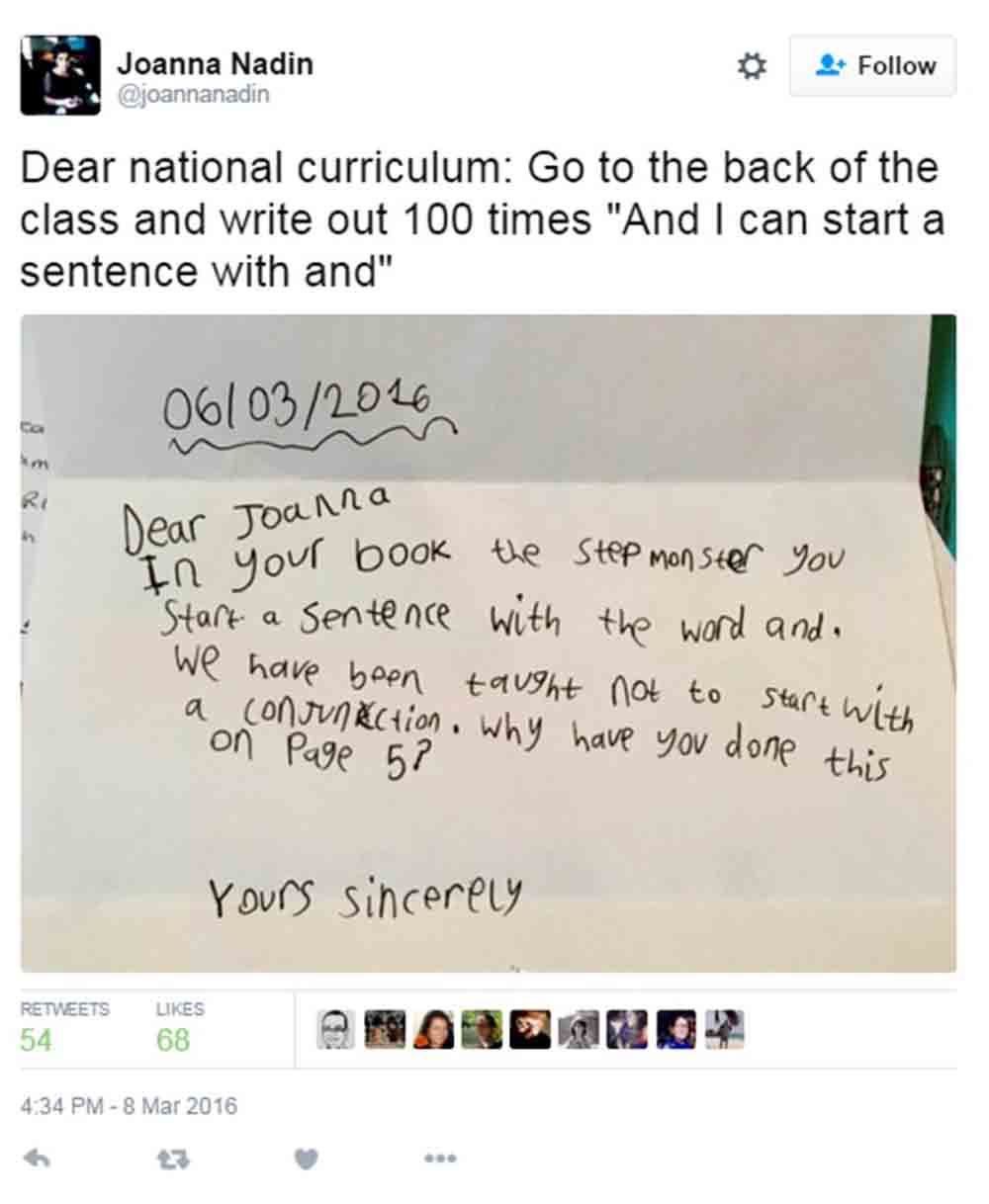 Nadin took the time to pen a very courteous and funny reply to her fan, in which we told the National Curriculum to “go to the back of the class”.

Isabella’s hand-written note read: “Dear Joanna, In your book The Stepmonster, you start a sentence with the word and.

“We have been taught not to start with a conjunction.

“Why have you done this?”

Ms Nadin, who used to write speeches for former Prime minister Tony Blair, took the letter in good spirits and posted her reply to Isabella on her Twitter page soon after.

The response, which encouraged her young fan to continue to questioning authority, read: “So, first of all I want to say thank you for writing to me.

“And an even bigger thank you for questioning a rule.

“Because I am often questioning rules, for example why do men wear ties?

“And why isn’t Robert a girl’s name?

“And why are cats allowed to wander wherever they want but goats aren’t?

“Although actually that last rule makes sense, because goats would eat everything they saw, but the rule on not starting a sentence with “and” is a silly one.

“And I can tell you a secret, which is that all of my writer friends, including some super famous ones, do it all the time, and so do magazines, and newspapers, and even Prime Ministers – i know this because i used to write for one, and i made sure he started sentences with “and” and “but”.

“So, next time your teacher tells you that you can’t start a sentence with a conjunction, you had probably better do what you’re told.

“But you can also secretly smile to yourself that you know this is a rule you’re allowed to break all the time in real life.

“And you can even change your name to Robert too, if you fancy.”

The exchange soon went viral on Twitter, with Ms Nadin earning the praise of other users who appreciated her reply.

Liz Flanagan said: “Love your reply so much. She will remember this letter.”

And fellow user, Rosey Chang, enjoyed the witty use of conjunctions throughout the reply:

“And that’s four sentences with ‘And’ and counting…”