Stranraer manager Brian Reid admits his side are going into one of their biggest games of the season today as they look to take a massive step towards securing a play-off spot.

The fourth place outfit welcome fifth place Airdrie and will attempt to increase their lead over Danny Lennon’s side to six points. 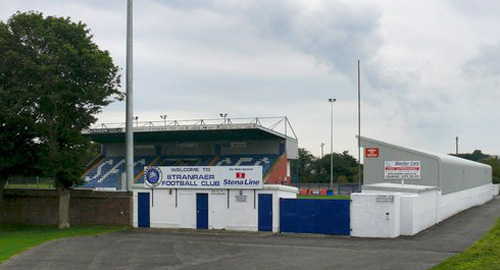 Reid has overseen a remarkable turnaround in the Blues’ fortunes since Christmas with the Stair Park side now in pole position to claim a top four place after fearing they were facing a relegation dogfight back in December.

Reid said: “It’s probably one of our biggest games so far in terms of where we are and where we want to be come the end of the season.

“There’s still a wee bit of work to be done before we get into that play-off position. If we do get to the play-offs we’ll have as much a chance as anyone in it.

“I came in at the start of the season and it can take time but we didn’t really have a settled team through suspensions and injuries and we had to chop and change it.

“We’ve had a settled team of late and we’ve turned it around a bit with the consistency in our play.

“Winning games gives you confidence and that is what has happened with us.

“It’s getting that belief, working hard and getting everyone is on board. We’ve got a good group of players and characters within the changing room.”

He added: “We’ve been playing well of late despite the defeat at Ayr.

“I thought that was cruel and we deserved to take something out of the game.

“Before the Ayr game we had only lost one match in 11, our form since Boxing Day has been really good and hopefully we can get back to that.”