SCOTT Robertson knows the pain of play-off disappointment all too well and is determined he won’t suffer for a third time this season.

The Raith Rovers midfielder was relegated from the top-flight with Hibernian in 2014 following a dramatic penalty shoot-out against Hamilton Accies and then lost out to Rangers in the play-offs last term.

The 31-year-old, who has penned a new one-year deal to stay at Stark’s Park, believes Rovers have surpassed expectations by ensuring he will have a third successive shot at achieving play-off success.

And the former Dundee and Dundee United player is adamant the Kirkcaldy club are not there to make up the numbers as they eye the possibility of promotion to the Premiership.

He said: “The play-offs were a bad experience for me last season – and the year before as well. It’s not been great.

“But if we were to achieve promotion that would be above and beyond the expectations of the club at the start of the season.

“That would kind of cancel out my pain over the last two years.

“I think going into the play-offs probably neither of the teams above us will probably expect us to make it to the semi-final.

“I don’t know if that would be a good thing on our part. We’ll just have to wait and see how the result goes.

“But I think being the underdog will suit us a little bit. I think we’ve got players who can hurt teams. If they were to open up against us, we’ve got a bit of pace and direct play that can benefit us.”

Although they still have a chance of securing third place in the Championship, if things stay as they are then Raith will face Hibs in the play-off quarter-finals, with Falkirk lying in wait for the winners.

Despite tight encounters, last month’s 2-1 victory over Hibs was the first time they have emerged on top against either of their league rivals in eight meetings in this campaign.

However, Robertson knows from bitter experience that the play-offs show no respect for previous form.

He added: “Looking at the fixtures last season, with the results during the season between Hibs and Rangers, I think everybody expected Hibs to beat Rangers in the play-offs.

“It’s definitely not like that. They’re games where anything can happen.

“If you look at it, Hibs are struggling to win any matches at the moment.

“I don’t know whether the cup competitions have distracted them. They’re big games and I don’t know if the players have been looking too far ahead – and then coming into the games against ourselves, Morton, Queen of the South and Alloa their focus hasn’t been quite right.

“It’s looking at the moment like Falkirk are favourites to finish second, but we’re not even fussed about who we play first.

But the Raith Rovers midfielder insists Hibs will have to reverse their recent slump if they are to have any hopes of repeating their League Cup triumph of earlier in the season. 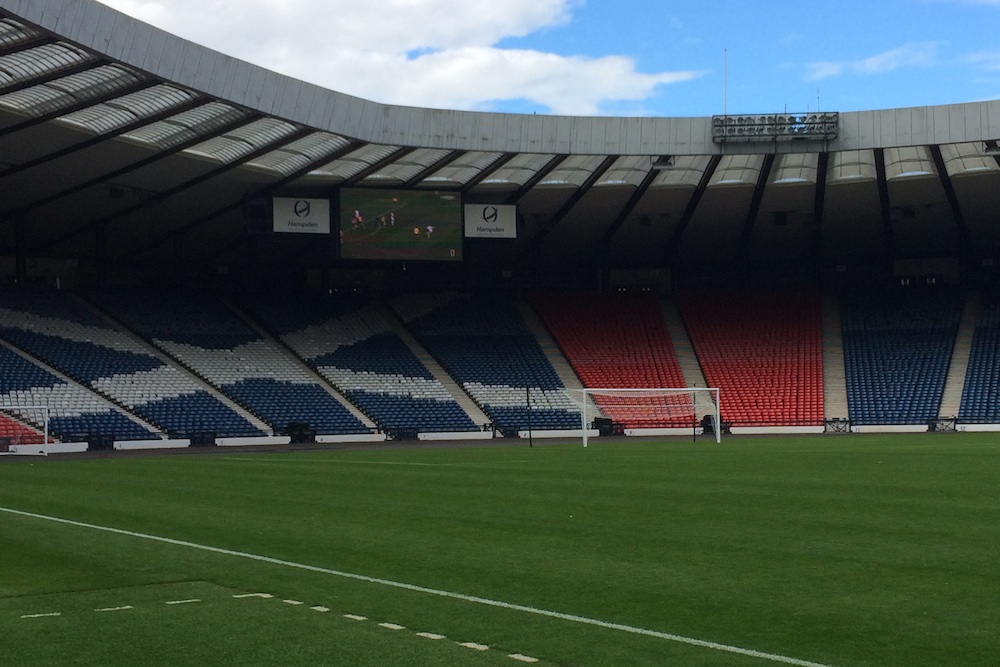 Robertson, who won the Scottish Cup with United in 2010, is still in touch with members of the Hibs squad after leaving last summer and is aware how perplexing they are finding their current run of just one win in eight league games.

But, with United also struggling badly and seemingly destined for relegation after being cut eight points adrift at the foot of the Premiership, the Hampden encounter looks set to be low on quality.

When the teams last met in the League Cup quarter-finals back in November, the Easter Road outfit ran out comfortable winners – but Robertson will be intrigued to see how tomorrow’s clash of his old teams pans out amidst their current league woes.

He said: “It’ll be an interesting match. Neither team are having a good spell at the moment, so it’s probably good for both teams to take their minds off the league and focus on what could be a great day for the winner.

“You’d like to think that if both teams perform then it could be a memorable semi-final.

“They’ve played already this season in the League Cup and Hibs ran out comfortable winners that day – but I think that will be far from the case on Saturday, because Hibs are in a bad way at the moment.

“I’m still in touch with and speak to a few guys at Hibs, like Lewis Stevenson. I think they’re scratching their heads a little bit over what’s been going on.

“When we played them twice in January, they beat us 1-0 and 2-0 in the league and the Scottish Cup, and they were on an unbelievable run at the time.

“But speaking to a few of the guys, and asking them how they were doing it, they were saying they weren’t playing all that well and they were just getting results.

“Whereas, recently, they’ve actually said they’ve been playing much better and then teams have been getting one chance against them, and that’s just the way it’s going for them at the moment.