EDINBURGH City manager Gary Jardine insists his side will not settle for making up the numbers in League Two next season after they created history by winning promotion to the SPFL.

A 87th-minute penalty from club stalwart Dougie Gair ensured it was joy for the Lowland League champions and despair for East Stirlingshire, who dropped out of the senior leagues and now face an uncertain future.

The celebrations at full-time were wild, as the City players cavorted with their fans before throwing their gaffer high in the air and soaking him with champagne. 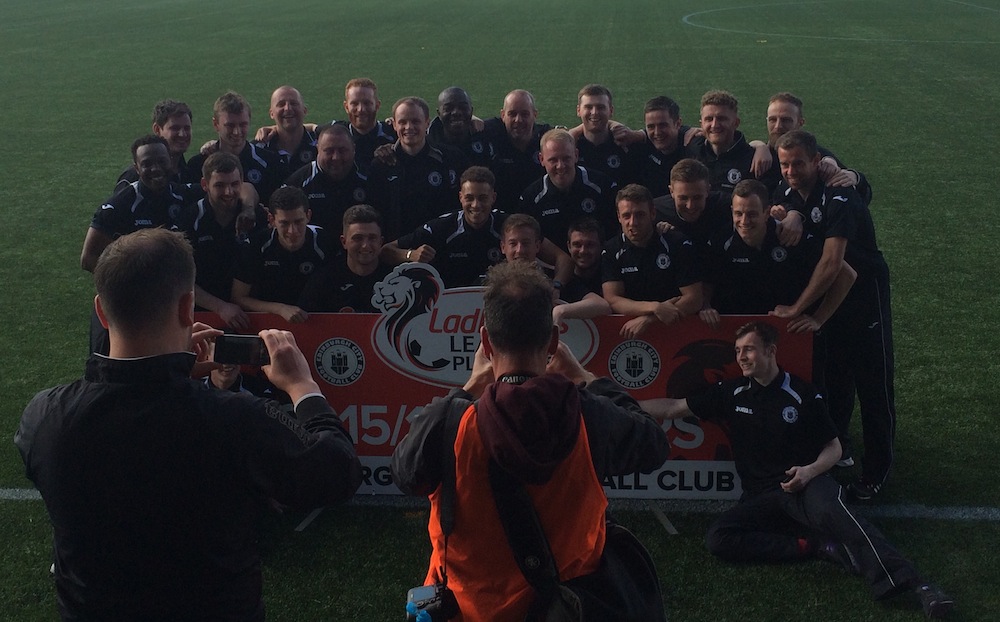 However, Jardine warned that this is just the start of a journey for his ambitious club, who he believes can set their sights on rising up through the leagues and not just survival.

“We don’t want to just be there – we want to make our mark,” he beamed. “We want to find a level we’re going to be able to play at.

“All season long we’ve scored the most goals at our level and conceded the least. We play on the front foot – as we did today – and we’ll do that next year.

“We’ll look to give it a real go. Some teams are promoted and look at being in second bottom place so they can stay up. We won’t be doing that.

“We’ll take it game by game but we’ll look to make our mark and there’s no reason why we shouldn’t look to get in the play-offs.

“For example, we’ve seen Cowdenbeath in recent years going from League Two to the Championship in successive seasons and that should be our benchmark.

“We just want to go and enjoy ourselves. We’ve worked ever so hard to get there and next season we’ll enjoy the moment.”

Following the previous week’s 1-1 draw at Meadowbank Stadium, Jardine knew there would be nerves in the Shire ranks as they faced up to the reality of losing their SPFL status.

And he was full of pride for the way his players seized their opportunity to create history as the first club to benefit from the pyramid play-offs.

“It’s surreal,” he added at full-time. “Right now, my head’s spinning, but it’s a fantastic feeling.

“My players, nobody has given them a chance. Apart from Joe Mbu nobody has played senior football.

“(On-loan) Aaron Dunsmore is making his way at Hibs obviously, but the rest have played their hearts out in Lowland League and East of Scotland level.

“Some of them have done it for five years, some have been doing it for 10.

“They deserve their opportunity now. They’ve gone and grabbed it.”