Stubbs faces the dilemma of showing faith in James Keatings – the striker who scored a brace in last Friday’s agonising play-off second leg defeat at Falkirk – or restoring 25-goal marksman Jason Cummings to the side alongside on loan Celtic forward Anthony Stokes for Saturday’s William Hill Scottish Cup final against Rangers.

Nine years ago, the former Scotland midfielder omitted the experienced Michael Stewart from the Hibernian side that romped to a 5-1 League Cup final victory over Kilmarnock.

A young Lewis Stevenson got the nod and justified his selection with a man of the match display. 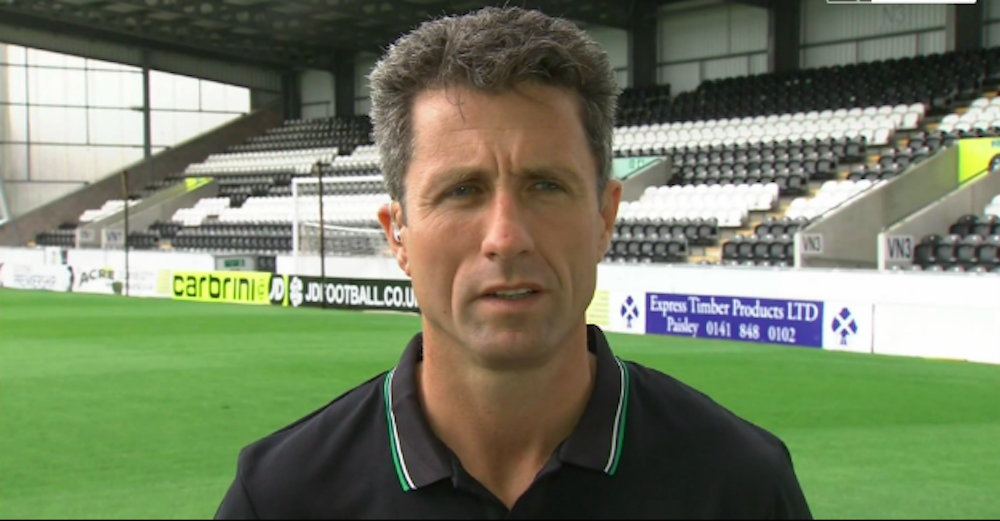 According to Collins, that is why he has been the target of Stewart’s verbal ‘bullets’ through his newspaper column and punditry since.

“It is a big decision for the manager,” said Collins. “It is what makes or breaks you. It is a tough one.

“Cummings has been scoring goals all season, special goals, good goals and Keatings has come in and scored two, the second of which was terrific.

“Cummings is your top goalscorer. I think he will be on the pitch, personally, but these are tough decisions.

“Stokes has got huge talent. He has proved it in the big games. He has that calmness about him and nothing really flusters him.

“In a big game you would fancy Stokes to cause Rangers problems. It is a tough decision – or can you play the three of them?

“These are decisions that keep managers up at night, tossing and turning, thinking and changing from one day to the next, and one hour to the next.”

Lifting the League Cup at Hampden in March 2007 was vindication for Collins leaving out Stewart, who had featured regularly for Hibs during the earlier part of the campaign.

But there is certainly no love lost between the pair, with former Manchester United and Hearts playmaker Stewart candid in his dislike for Collins’ coaching style during his 14-month reign.

“I am used to it,” insists Collins, who has followed manager Ronny Deila out of Celtic after helping lead the club to a fifth straight top-flight title.

“He has made quite a few bob out of talking about me in his columns.

“He was disappointed that day but as a manager it is about making big decisions and sometimes that means putting noses out of joint.

“Lewis was outstanding but I knew what he was going give me. Hibs fans have watched him for the last nine years and they know what they are going to get from Lewis; he gives you everything.”

Club stalwart Stevenson is again set to line up for Hibs at Hampden this weekend as the players attempt to lift themselves following the devastating low of being condemned to a third straight season in the Championship following a 5-4 aggregate defeat to the Bairns in the play-off semi-finals.

“I had it at Hibs, everybody knows that. We won the cup and then the team is broken up and sold, nine-and-a-half millions worth of talent goes out the door and then you have to rebuild.

“Jason Cummings is scoring goals and I’d imagine they will have offers for him. John McGinn has had a terrific season and been a great signing for them.

“He’s had his Scotland cap so I’d imagine they may have offers – that’s a decision for the board to make.”

Collins’ frustration over the perceived lack of investment in the Hibs squad was the reason he resigned from the post in December 2007.

“I stand by my decision,” said the 58-times capped midfielder, who went on to manage Belgian side Charleroi and was director of football at Livingston when John Hughes was manager.

“It was the right time for me to leave Hibs. It’s for other people to judge (if what I said came true) but Hibs are still in the Championship. Hibs should be in the Premiership. It’s not been a great nine years for Hibs.”

Admitting that Hibs will be better off for having on loan Celtic pair Stokes and Liam Henderson available, Collins envisages an entertaining contest on Saturday.

He added: “I think it’s a real close game. When I look at them player-for-player there’s not a lot in it. It’s two different systems in play. From a coaches point of view it will be interesting to see how the different systems work.

“It will be a wonderful atmosphere and the pitch will be great. There have been lots of goals in the games they’ve played so from a neutrals point of view I think it’s going to be good, good for Scottish football.”

*John Collins was speaking at a William Hill media event. William Hill is the proud sponsor of the Scottish Cup