Alan Stubbs hopes Hibernian’s historic Scottish Cup win can inspire his son, Sam, onto a glittering career in the game after 150,000 delirious Hibees lined the streets of Edinburgh to welcome the Holy Grail back to the capital.

The Hibs squad, who now enjoy legendary status after ending the infamous 114-year hoodoo, were given a civic reception by the Lord Provost at the City Chambers before snaking their way through the Old Town and back to Leith.

While there were plenty of bleary eyes on the open-top bus, Stubbs insists he enjoyed a reserved Saturday evening following the momentous 3-2 win over Rangers as he toasted the triumph with his family. 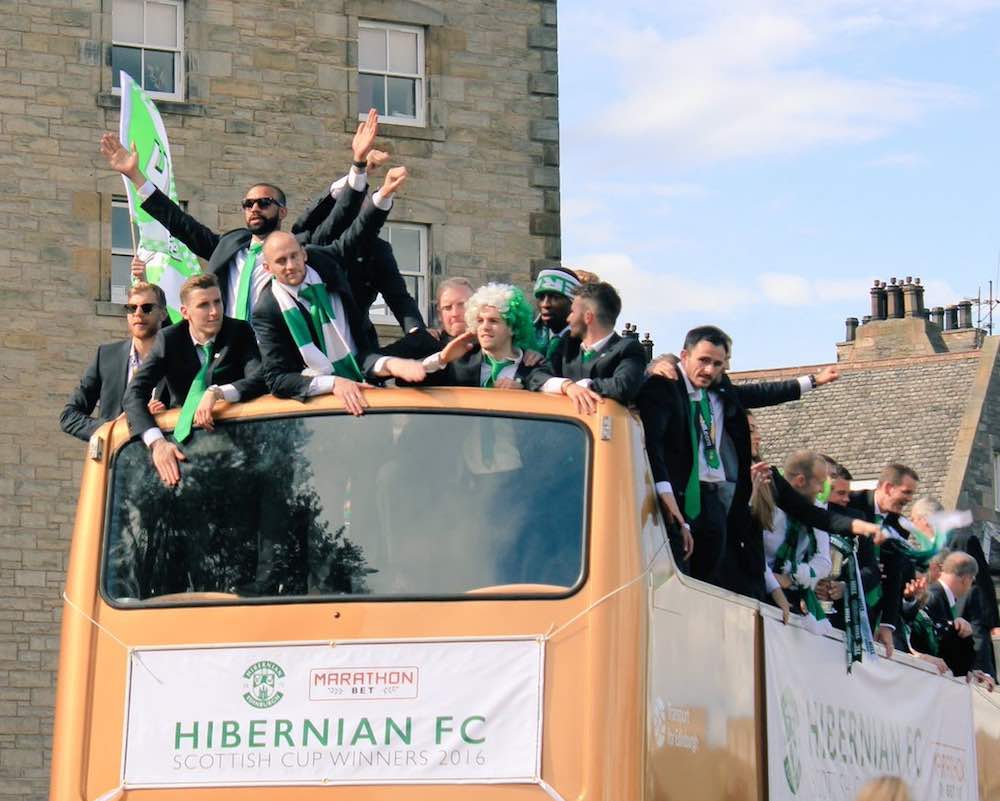 It was a particularly poignant moment to share with his 17-year-old son, who is currently on the books of Wigan Athletic and hoping to emulate the achievements of his old man.

“We went back to Easter Road for a while but I didn’t have a heavy night,” he added. “I had my family up including my son Sam who is just about to take his first step on the ladder after completing his first year scholar at Wigan.

“He now has a memory of seeing this football club and me as a manager lift something. That’s special and words can’t describe that.

“I don’t interfere, it’s up to him. If he wants to work hard. But for him to see that, and hopefully take something from the occasion, was fantastic for me. Looking at him now I’d say he’s better than me when I was his age.

“All my early memories would have been based around Everton, seeing them winning the FA Cup and walking up the old Wembley Way, and maybe he has something similar now. Mind you, he doesn’t say much, he’s typical Kevin the Teenager.

“It was good to go out with him later on and with my daughter . . . that’s probably why I didn’t drink too much – I had my eye on them more than anything else!” 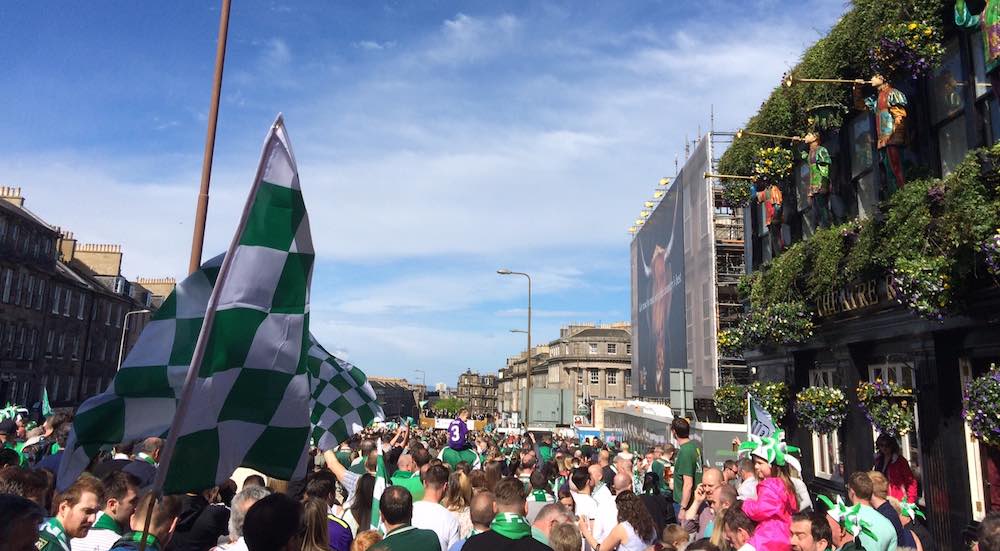 Stubbs, however, treated himself to a dram last night after an unforgettable afternoon in Edinburgh.

Through all of his successes at Celtic, he was denied the opportunity to sample an open-top parade due to the Old Firm tensions in Glasgow, and he was overcome by the experience.

“We spoke to one or two people beforehand and they side the bus parade could be something special to witness,” he continued. “But as we started the journey it got bigger and louder with every corner we turned.

“It was a mass of green and white. It was a bit crazy. I did it once at Bolton but not on that level. It was mind-blowing. I know Saturday was special for the players but none of them will forget the parade.

“It’s pleasing to lift a huge weight off their shoulders. We’ve been lucky enough to be the team that has achieved that. There has been as many good teams before us who have tried and unfortunately not succeeded and we’ve been the ones who managed to do it.” 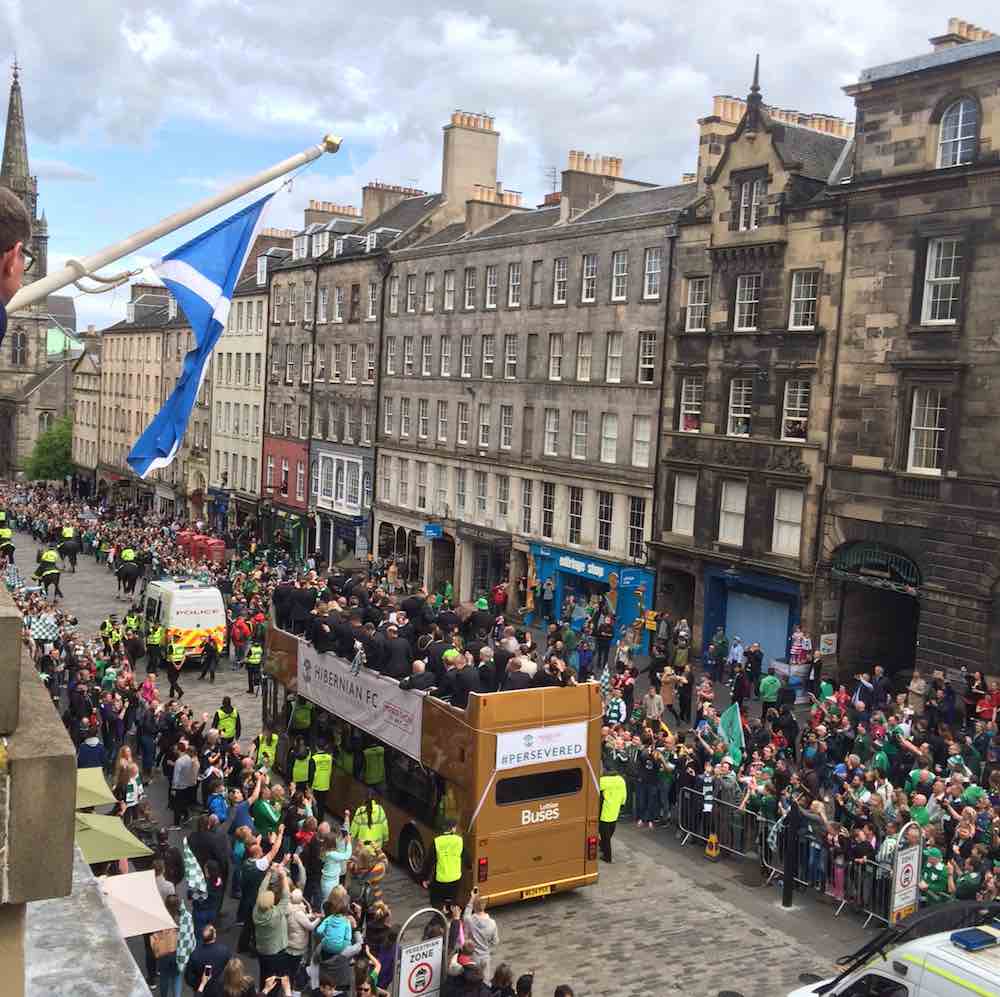 Meanwhile, Stubbs has for the first time admitted that Hibs’ pursuit of a Treble may have cost his side their chance of promotion as the congestion piled up.

“Did the Scottish Cup cost us promotion? Possibly. I can’t 100 per cent categorically say it didn’t,” he added. “I wouldn’t swap anything. I wouldn’t change it.

“When you see what this competition meant to the fans – maybe a split of 60/40 or 70/30 of Hibs fans would have taken the cup over promotion. That sounds a bit strange, but when you have waited 114 years I can see why.”

Already looking ahead to next term, he added: “We have to try and get promotion, that’s the next step . . . but I am just pleased that, when we enter the Scottish Cup next year, the first question won’t be what I’ve been asked for the last two years!”