A HILARIOUS interview prank has left the nation in stitches – after an unsuspecting Scot was tricked into answering questions such as “describe yourself as an animal”.

The unsuspecting victim was also asked for his views on the EU referendum, rank “free lunches” as a job priority, told to include a selfie, and asked for his meal plan – all of which he dutifully provided.

James Hartness from Strathaven, South Lanarkshire, posted the fake advert on job site Indeed asking for an apprentice welder to get in touch.

The listing, uploaded four days ago, states that the job pays £16,000 a year and asks any applicants to text a mobile number.

Today (Tues) he received a reply from an innocent lad named ‘Josh’ enquiring about the position.

He asks the poor youngster a series of crazy interview questions – which are dutifully replied to.

And the hilarious exchange has now gone viral online, with Scots calling it “the biggest bite ever”.

He then begins to make his enquiries more obscure – including “For medical reasons could you please give me your height, weight and a rough idea of your meal plan (how often you have junk food and what type).”

Josh, who is believed to be 17, replies: “I don’t have a meal plan but have breakfast, lunch and dinner each day. I eat the odd chocolate bar maybe once every three days and have crisps every now and then but not a lot.” 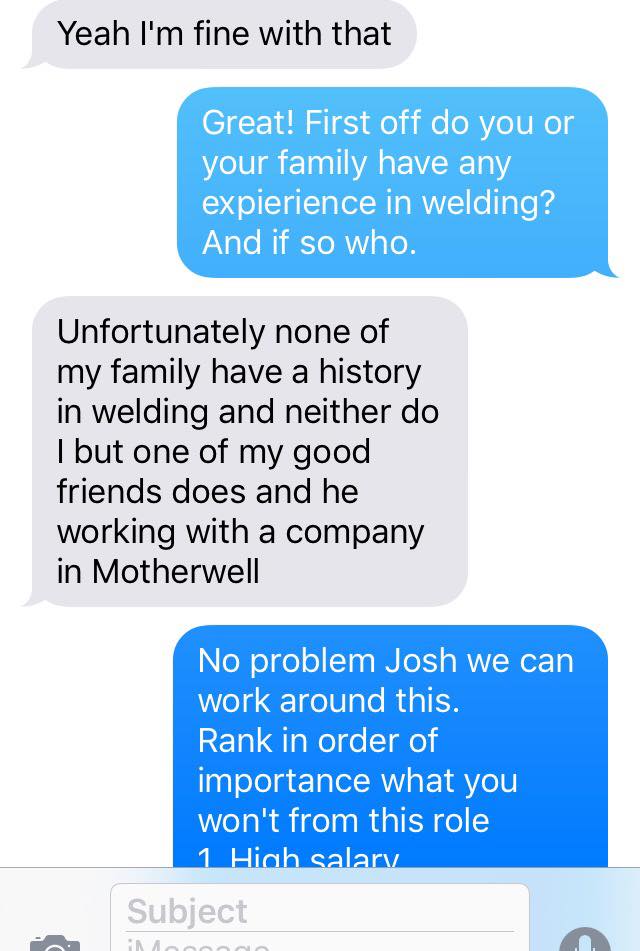 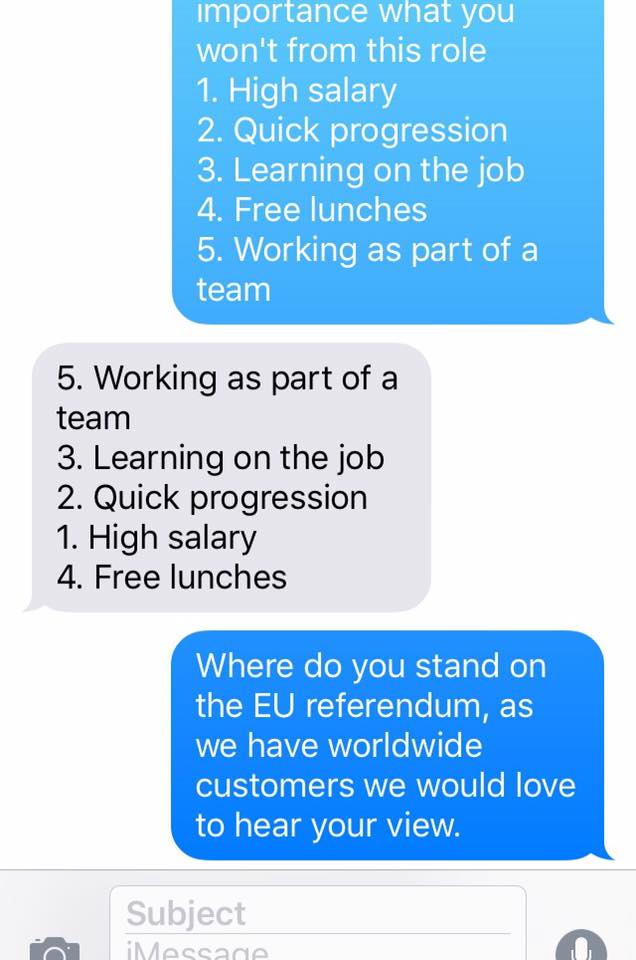 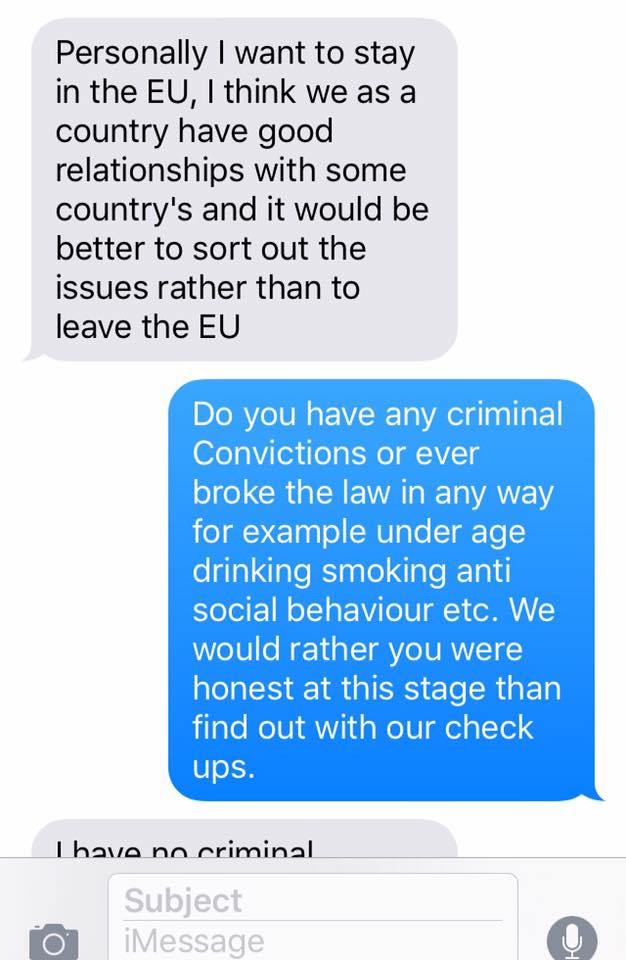 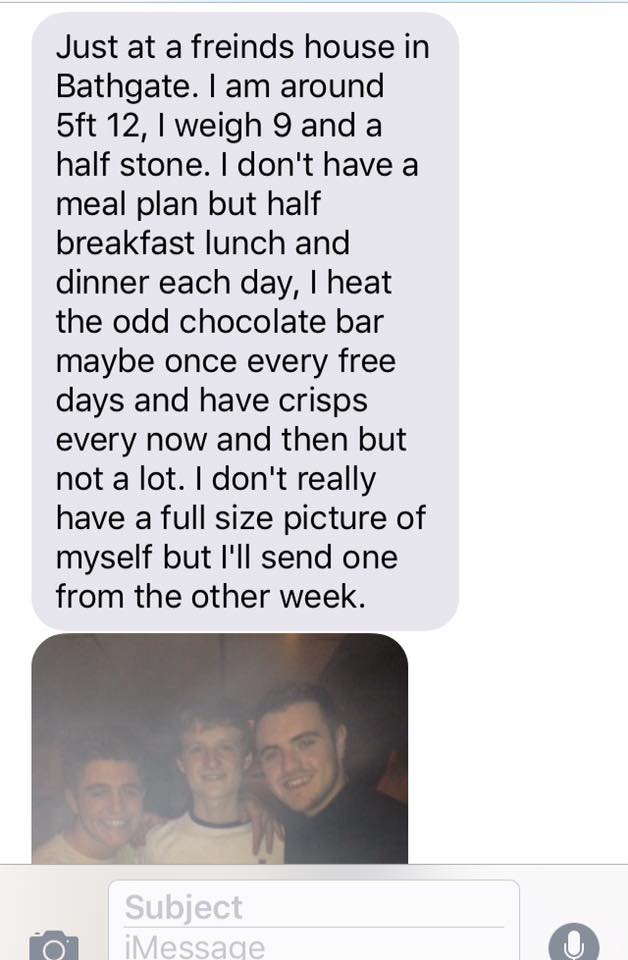 James then asks Josh to send over a selfie “to put on file with your application” – to which Josh obliges.

The final question reads “If you could describe yourself as any animal in the world what would it be, and why?”

Josh responds: “If I was to describe myself as any animal it would be a monkey. They are very energetic and excited animals which helps to describe my sort of personality.” 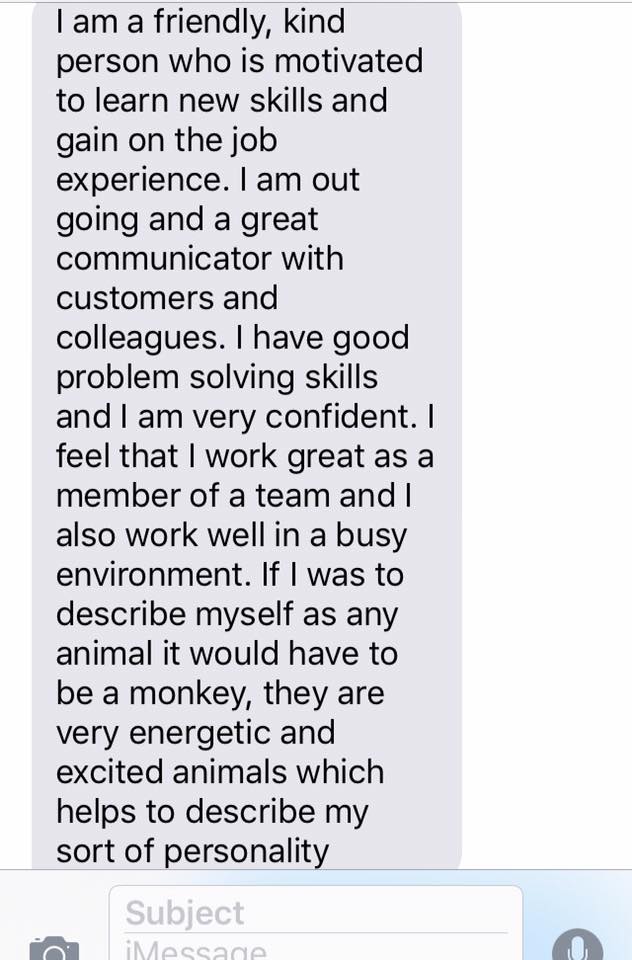 At this point, James cannot take any more and finally fesses up to the prank.

He writes “Cheers mate this has made ma morning” with two emoji crying faces.

Once Josh has realised what is happening he says: “This is not real is it?

“F*** sake man, just trying to get myself a wee apprenticeship.

The exchange has attracted hundreds of ‘likes’ online, with amused Scots calling for the poor boy to be given an apprenticeship.

Gary Mills said: “Gee the poor guy a start for his efforts.”

Barry McGuckin added: “Be good if someone actually gave him an apprenticeship now.”