Rowling backs US student banned from prom over n-word poem

JK ROWLING has publically backed a black student from the US who was banned from her prom for using the n-word in a poem.

Taiylar (corr) Ball, from Chicago, caused a sensation with her poem – “Dear Black Girls” – which she performed to fellow students at the city’s Homewood-Flossmoor High.

But after education bosses took revenge by banning the 18-year-old from her end-of-school prom, Rowling joined in the growing worldwide support for the girl.

The author took to Twitter to write: “This is shameful: a student punished for speaking her own words in a poem. #freedomofexpression”

Taiylar, acknowledging the support then tweets: “Thank you so much”

In reply, Rowling tells the high school student that what she could hear was “wonderful”.

She said: “Taiylar, I didn’t know you were on here! I’ve seen video of you performing the poem.

“Sound quality’s bad but what I can hear is wonderful. Have you got a better version?”

“Yes! I can dm you the copy of it and the whole video. You have to follow me back” replied Taiylar. 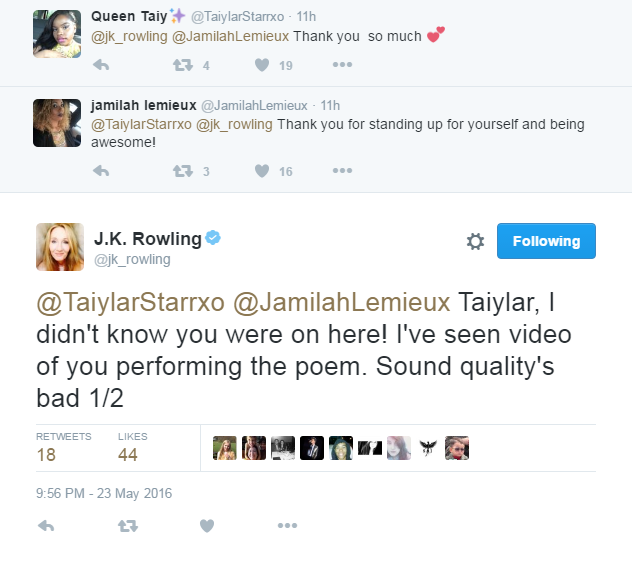 Last night, Rowling tweeted again to share the original video, saying: “[email protected] was banned from prom after performing her poem to her school. Enjoy her #freedomofexpression below!”

Many of her fans agreed and praised the poem and its sentiments.

Marverine Cole said: “school will soon regret that decision when they see how foolish they look in the eyes of the rest of the world.”

Cathy McClelland said: “I wish more young ladies would use their voice against injustice and love themselves despite society.”

Whilst Jill Beavis said: “From the bits I could hear it sounds a very powerful poem. Great if she can publish it as well 4 others to read.” 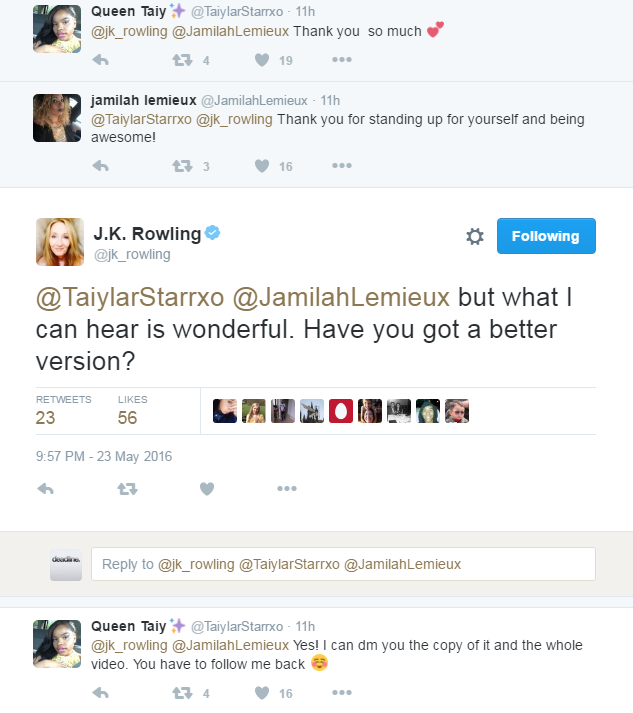 The video, which has been viewed over 6,000 times on YouTube, shows her classmates going wild and clapping as the poem is read but following the recital, Ball was told not to attend prom.

The video is over four minutes long but a section of the poem reads: “Dear Black girls your mind is filled with self hate, and emotion but let me tell you brown girl, you are one of a kind…love yourself cus they don’t…there is power in your melanin…

The academically-gifted student will start at the Florida Agricultural and Mechanical University as a biology student this Autumn.