Neil Lennon: ‘Hibs must not dine out on Scottish Cup triumph and focus fully on winning promotion’

NEIL Lennon insists the time for ‘dining out’ on Hibernian’s historic Scottish Cup triumph is over after admitting he must lead his new club back to the Premiership ‘by hook or by crook’.

The former Celtic manager was unveiled as Alan Stubbs’ successor at Easter Road yesterday and declared himself up for the challenge of returning Hibs to the big time.

The Northern Irishman, who is intent on hanging on to Jason Cummings and John McGinn and building his team around them, is fully aware that the pressure is well and truly on for Hibs to win promotion and avoid an unprecedented fourth year in the Championship.

However, the 44-year-old believes dealing with the expectations he had on his shoulders during over four years in the dugout at Celtic will have prepared him for the ‘dog-fight’ he expects next term.

Lennon, who confessed finances are likely to rule him out of a bid to sign last month’s cup final hero Anthony Stokes following the striker’s departure from Parkhead, said: “When you are manager of Celtic, you need to win the league.

“It will be a dog fight and I don’t think we are the favourites.

“Winning the Scottish Cup is great for the fans, more than anyone else; all the leg-pulling they’ve had, the gloating and goading.

“They’ve got that monkey off their backs and it was a great achievement by the players.

“But I don’t want them dining on that. When their careers are over they can but it’s important we get out of this division now.”

Having failed in the past two seasons to achieve that aim, there is a feeling that Hibs simply must win promotion next year and Lennon has warned he will not put up with the ‘boy band’ behaviour he witnessed within the Easter Road squad as a player.

Asked about perceptions of his new club suffering a soft centre on the pitch, he added: “I’ve been one of the first ones to say that about Hibs – ‘boy band’.

“When I played against them, they had Scott Brown and Steven Whittaker and all these lads. They would come and play Celtic and play really well and then they would go out partying in Edinburgh, getting pats on the back.

“Then they would go and lose to Motherwell the week after. 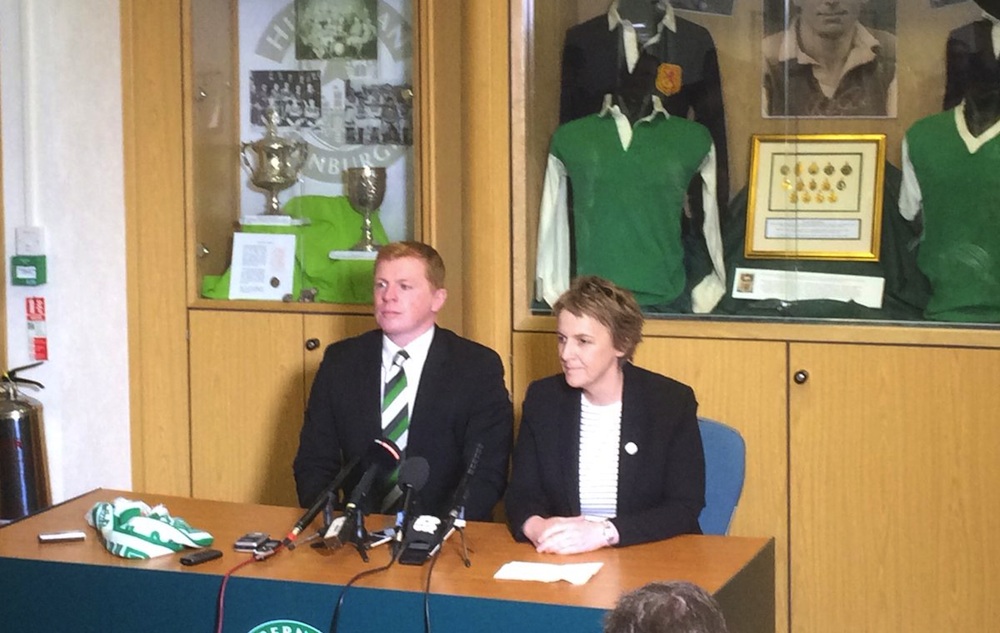 “That won’t be tolerated here by me. I don’t want them getting pats on the back for beating Raith Rovers or drawing away at Dumbarton.

“I’ll give them a pat on the back if they get promotion.

“They’ve got to learn quickly. It’s not acceptable for a club of this standard. Inconsistency won’t be tolerated. Or ill-discipline.”

Lennon will talk to Stubbs in the coming days to get the low-down on the squad he is inheriting, but believes he is joining a bigger club than the one his predecessor has left to make the switch to Rotherham United in the English Championship.

The former Celtic midfielder claims only time will tell whether his ill-fated 18 months at a troubled Bolton Wanderers, where he had to deal with financial difficulties and relegation battles, has made him a better manager.

But it appears to have given him a new appreciation of Scottish football and where Hibs could fit in to that.

He went on: “This is a big club. Stubbsy has gone to Rotherham but Hibs are a bigger club than Rotherham. Yes, it’s England and the Championship, where there is more money swilling around.

“But Hibs are the bigger club and I want to make this club big again.

“(Hibs should be) top four. In my time, Motherwell finished second, Inverness and Ross County are among the clubs that have been in the top-six, St Johnstone have consistently been third or fourth in the last couple of seasons.

“I certainly feel I can take Hibs to that level.

“It is going to take a bit of time. A bit of patience is going to be required, it’s not going to happen overnight, but that’s the plan.”