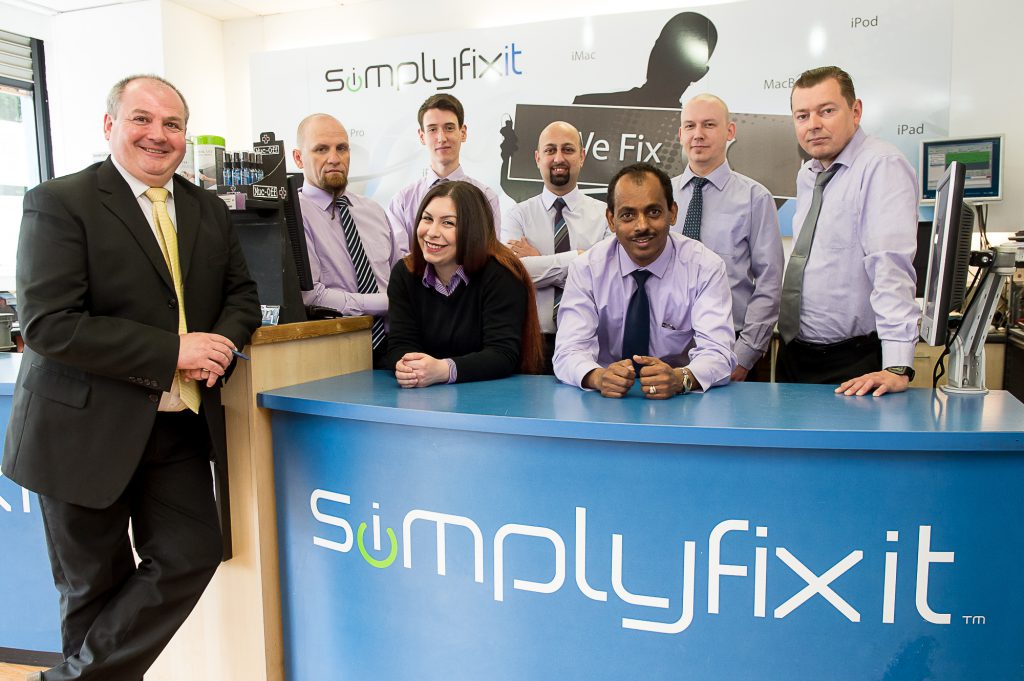 than the minimum wage – enough to buy a new iPhone, iPad and Macbook laptop, with

plenty of change left over – before any other companies in the sector.

employer. Now the firm, which operates in Glasgow, Edinburgh and Dalkeith, hopes tech

“To be the first in your field always feels special. But to be a leader in such a vitally important area is particularly gratifying, knowing we are supporting our staff in a way that others might not be. When it comes to acting ethically there’s only one side to be on.

“Ideally we hope to see the tech big boys follow suit. If a company like ours, with eight shops and 35 staff, can do this, it would be heartening to see the likes of Apple, as one of the biggest companies on the planet, and PC World, as a high street name, also come out and publicly support the Living Wage.”

SimpyFixIt has just celebrated its 20 th anniversary and the increased wage commitment aligns the firm with scottishlivingwage.org, an initiative launched in partnership by the Scottish Government and The Poverty Alliance.

It means staff at the stores will earn £1.05 more an hour than the UK Government’s national minimum wage. It means, based on a 40 hour week, SimplyFixIt’s staff could earn £2184 a year more than workers at companies which do not pay the Living Wage.

Scott added: “Staff are the backbone of any business. Since we pride ourselves on excellent service, it is essential our employees are happy and motivated to go above and beyond for our customers. Our people are the key to our success.

“We believe that everyone who works should be fairly paid, so this was a natural step to take. If our staff have a bit more in their pocket, that’s good for everyone.” That is echoed by experts who insist that employers who pay the Living Wage are likely to see a host of benefits, not least the faith in their workforce being repaid with increased productivity and reduced staff turnover.

Peter Kelly, Director of the Poverty Alliance said: “Paying the Living Wage not only has benefits to the individual employees but also businesses and wider society. “Evidence from other Living Wage employers shows that receiving the Living Wage allows their staff to enjoy a better quality of living, whether that means being able to set aside a few extra pounds every month to save for their future or being able to spend more time with friends and family.

“Businesses which pay the Living Wage have recorded lower levels of absenteeism, increased staff retention and productivity.” SimplyFixIt started as a PC retailer in Edinburgh&#39;s Bruntsfield area and has grown to include eight stores, most recently opening a new branch in Glasgow’s Bath Street. All of its outlets specialise in the repair of smart phones, tablets, laptops and both Apple and Microsoft Windows based computers.

It recognises that its staff are vitally important to the long term health of the business, which recently announced record turnover of £4.2million. To date more than 500 companies have been accredited with living wage status by the Scottish Living Wage Foundation – with SimplyFixIt becoming the first computer repair shop in the country to make this provision for all of its workers.

Ten things the extra £2184 from the Living Wage could buy:

5) A two week holiday to Marbella staying in a four star hotel, including return flights on

Ryanair, leaving you with £500 spending money